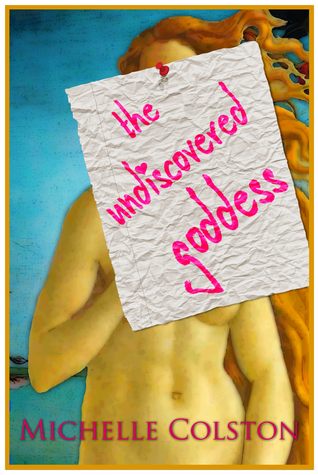 Who knew a Cosmo quiz and a bottle of wine could change a woman’s life?

Holly, housewife and frazzled mother of three, is determined to discredit the lackluster result of a Cosmopolitan magazine quiz. After buying a workbook geared toward helping her find her inner goddess, Holly sets off on a year of self-discovery, journaling through each exercise as she goes. Facing inner demons, yoga, an explosive colon cleanse and REALLY spicy curry, the lessons are hard on her emotions, not to mention her digestive system. But does she succeed in the end? Beyond the superficial, what important lesson does Holly’s inner goddess have the power to teach her…and what can Holly teach you?

I finished this book a couple hours ago and I’m still not sure how I feel about it.

I’m not sure what I expected, but it wasn’t this. I know I wasn’t expecting blurbs about finding myself on every other page. I certainly wasn’t expecting 90% of the book to be written like a journal. I wasn’t expecting frequent typos. I was expecting, from the summary and the reviews, that it would be funny, but I don’t think I laughed more than once or twice.

“What can Holly teach you,” asks the summary. Well…

Holly can teach me to stop acting like I deserve the world just because I occasionally have to do things I don’t want to do. Holly is a wife and mother of three. She doesn’t seem to really like her husband anymore (he’s away for work a lot) and often seems to detest her children. She has a lot of responsibilities, sure. She channels her frustrations into spending copious amounts of money on designer clothes she’ll never wear and drinking more alcohol than it’s healthy to consume. Apparently Holly is so wrapped up in self-pity that she doesn’t realize she could take some of that money and use it for, oh, I don’t know, A BABYSITTER SO SHE CAN GET SOME TIME TO HERSELF?! Instead, she literally thinks about murdering her son when he asks her to make him a sandwich. Yes, this is a thing that actually happens, and Holly sees nothing wrong with it. This book is supposed to be funny. IT IS NOT.

Holly can teach me what it really looks like when I complain about stupid things or blame my moods on my period. Holly is constantly menstruating, and constantly describing what stage of her cycle she’s in. She is extra mean to her husband during this time of the month (he finds it funny, not disturbing) and uses it as an excuse for doing (or not doing) whatever she wants. I hope I don’t use my period as an excuse for being a terrible person half as much as Holly does. It was incredibly tiring to read about her shirking responsibilities and snapping at everyone just because she has cramps.

Holly can teach me to be a happier person. I never want to be seen the way I saw Holly. She was a miserable person who only got a smidgen more tolerable toward the end. I think one of the biggest reasons I didn’t like this book was that I didn’t like Holly. It’s awfully hard to muster up the energy to read about a character you can’t stand. Now, granted, Holly does a complete 180 over the course of the book, but it comes across as very staged. She has convenient epiphanies related to each chapter of her workbook that allow her to move on to the land of better people. But even at the end, is she really as enlightened as she thinks she is?

Thanks, Holly, for giving me a wake-up call about how I’m perceived, though I doubt this was the intention of this supposedly funny book.

On the bright side, this book made me want to take up journaling again. It’s something I used to do pretty frequently, and although I would cringe at past entries, it was very therapeutic to get all my emotions out in a private way. It made me want to start working out with more frequency (I actually did 20 minutes of cardio immediately after putting the book down, so there’s a plus). And it made me want to set aside some time each week just for myself so I can unwind and be a happier person.

I’m just really glad to be done with this book.