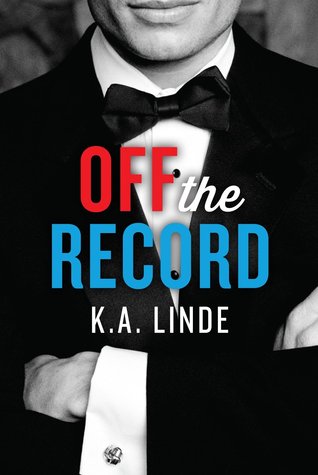 Liz Dougherty has no idea a single question is about to change her life.

Her first big reporting assignment for her North Carolina college newspaper has her covering a state senator’s impromptu press conference. Brady Maxwell may have everything it takes to be a politician—a winning pedigree, devastating good looks, a body made to wear suits—but his politics rub Liz the wrong way. When Liz’s hard-hitting question catches the upstart senator off-guard, it impresses Hayden Lane, Liz’s editor who feels she’s headed for a promising career as a reporter.

But Liz is also headed into a secret romance with Brady that could destroy both their ambitions. Though he’s a bachelor, potential voters might frown on Brady cozying up to a reporter. And Liz isn’t sure sneaking around is enough for her—especially when things between her and Hayden might be less platonic than she thought.

Sleek, sexy, and smart, Off the Record ventures into a high-stakes campaign and an even higher-stakes affair to answer the question: When politics and love collide, can there ever be a winner?

Off the Record intrigued me from the start. It had been popping up as my friends reviewed it, commented on other people’s reviews, and generally buzzed about it. The premise is great – a college reporter starting a forbidden romance with a sexy senator – but this book just didn’t do it for me. Mild spoilers follow.

…Is it bad that I never felt the chemistry between Liz and Brady? Because really, that’s all I could think while I was reading. The book is very entertaining. It’s a quick read, and I can’t say the writing is exceptional, but it’s decent. But I just could not understand Liz’s attraction, and attachment, to Brady.

The thing is, Brady is a jerk. He flirts with Liz a couple times before propositioning her for a friends-with-benefits situation, totally secretive. They can’t be seen together in public. Nobody can know they’re dating. He can tell his friends, but she can’t tell hers. Liz is shocked, but she decides that she wants him so badly that she’ll do whatever he wants. I rolled my eyes so far that I’m surprised they didn’t get stuck.

Liz has so much more chemistry with her friend Hayden, but it’s barely touched on. He’s there when it’s convenient – when she’s sick of being Brady’s secret and wants to feel good by being paraded around in public. Although she repeatedly states that she’s had a crush on Hayden forever, the second he starts showing interest, she runs off with some jerk who makes her use A FAKE NAME when she calls him, and tells her she’s never to call his cell phone or acknowledge him in public.

He tells her, don’t call me, I’ll call you, but you better be available the second I call, or I’m going to throw a tantrum. He says, don’t hang out with other guys because apparently I’m too insecure to handle you having friends. He says, I’m going to buy you expensive gifts and hope that you forget that I’m SUCH A HORRIBLE PERSON. But apparently Brady is good in bed, and that’s all that matters to Liz.

Everything is all fine and sexy until Liz starts falling in love with Brady, because of course she does, despite the fact that he’s an awful person. “WHY CAN’T WE BE TOGETHER?!” she cries to Brady. “Because nobody can know I’m dating a reporter,” he responds. Again. And again. And again. But why can he not date a reporter? That is the stupidest excuse. She is a legal adult. Neither of them are in other relationships. She’s a smart, talented girl who knows how to carry herself in public. Why would he not want to be seen with her… unless something shady was going on? Red flags were flying. Warning lights were flashing in my peripheral vision. I COULD NOT TRUST THIS MAN, and that made me very uncomfortable as I read about Liz’s growing attachment to him.

Off the Record gets three stars from me for being entertaining, but not much else. If you hate angst as much as I do, stay away. But if you like your characters to constantly cry over how they can’t possibly be together, you’ll be all over this one.