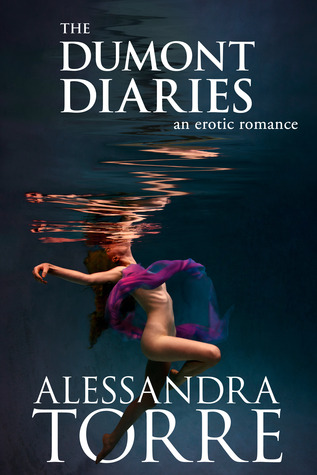 Lust is a dangerous thing. It can make you believe things that are not real. It can seduce your mind and lead it blindfolded to the cliff that will be its demise.

What would you do if you could leave your life? Wake up one day and be someone else?

“I need a wife. I am not signing up for romance, or affection, or a full time job. I will not love you. I will have no use for you other than sex and photo ops.”

Sex with Nathan was easy. More than easy. Panty-melting, can-never-get-enough HOT. I had begun to think that I could live this new life, showered in luxuries, orgasms, and diamonds.

Then I started tripping over secrets.

He is a drug that I have no way of resisting, bad for my soul, but so heartbreakingly perfect in its deliverance.

I first downloaded The Dumont Diaries a couple months ago when it was a Kindle freebie.  And there it sat, at the bottom of my Kindle shelf, as I consistently chose other books that sounded better.  I’m not sure why I never had the motivation to read it, but I finally decided to jump in a few days ago.

I was not impressed.

Candace Tapers graduated from college three years ago, but never paid much attention to her classes and therefore wasn’t able to find a job in her field.  The only job she could find was at a gentleman’s club, where she dances and occasionally performs sexual favors for high-paying clients.

Candace has very low self-esteem.  She talks herself down all the time.  She does things she’s not really comfortable with because she feels like she doesn’t deserve anything better.  When a mysterious VIP client requests to take her home with him, she barely thinks twice (because he’s hot).

Turns out that the mystery man, Nathan Dumont, is a young millionaire who proposes a fake marriage with Candace.  The marriage contract stipulates that Candance will have all sorts of hot sex with Nathan and Nathan will foot the bill for her father’s medical care.  Candace thinks about it for about three seconds before deciding that nothing better will ever come along and she might as well sign her life away.

I’m going to try to explain why I rated it so low.  It’s not so much that it’s an awful book.  The writing isn’t going to win any awards, but it’s decent.  The pacing is fine.  The dialogue is more or less natural.  Even the sex scenes weren’t all cringeworthy.

It’s more the characters and their actions that did me in.

The main reason that Candace signed the marriage contract was its stipulation that Nathan would cover her father’s medical expenses.  How awful is it that Nathan preys on a young woman with her own mounting debt who now needs to worry about her father’s bills as well?  He doesn’t care about her as a person.  He has his own goals for her (which I will not get into, but I will tell you that they’re stupid and in real life would never work) and doesn’t care if she or anybody else gets hurt in the process.

Nathan treats Candace like… I don’t even know.  I would say an animal, but usually, people are nicer to animals than Nathan is to Candace.  Not only is Candace at his beck and call sexually, she’s also expected to constantly look perfect (to the point that he hires her a personal trainer who literally makes her ill with exertion), befriend only the people he chooses, and make it look to photographers like she’s the happiest woman in the world.  She’s not even allowed a cell phone or a room in the house.  He makes her sleep in a glass guesthouse where he can watch her every movement.

And then the sex.  We might as well get into the nitty gritty of it.

As I said above, not all of it is bad.  But most of it is not good.  There is a lot of dubious consent and one scene in particular almost made me throw the book across the room.  How anybody can think of Nathan as a romantic hero after the limo scene with his colleague is just beyond me.  In all of the hundreds of books I’ve read in recent memory, I don’t think I’ve ever had such a visceral reaction as I did to that scene.

Even worse than Nathan’s actions is the way that Candace tries to rationalize them.  “Well, even though I said no, I guess I kind of liked it.”  NO!  You didn’t want to do it.  You shouldn’t have had to do it.  Don’t try to convince yourself that you liked it.  “I was so embarrassed that he made me have sex in public, but I guess it was kind of hot.  And he liked it, at least.”  NO!  STOP IT!  Your husband should not be degrading you and embarrassing you and forcing you to have sex in front of his employees. It’s not right and it’s not sexy.  It would have been different if Candace liked it.  But she didn’t, and she spends an awful lot of time trying to convince herself that it’s okay.

There was one ending that would have maybe made this book okay.  And that’s Candace leaving Nathan to go figure out her life in peace.  That doesn’t happen.  There is no happy ending here.  I would not be surprised if Nathan turned on Candace and murdered her in her sleep. He’s not a good guy, he’s not a romantic hero, and he’s not someone I ever want to read about again.

One thought on “Book review: The Dumont Diaries by Alessandra Torre”