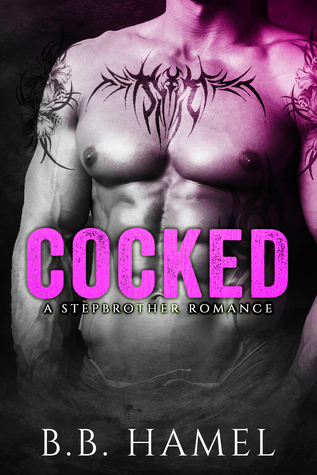 He’s cocked and always ready, my stepbrother the thief . . .

He’s a thug and a grifter, always looking for something new to fill the hole inside of him.

Five years ago, Camden disappeared. Nothing was the same after that. My family’s life was completely changed forever.

We all thought he was dead. Until one day he showed back up on our doorstep, grinning his delicious smile.

I hate him for what he did. We were as close as could be, and then he was gone, taking a piece of me with him.

But something changed him. He’s still drop-dead handsome, with a toned body and a cocky swagger that never quits, but there’s a darkness inside of him now.

I know he’s hiding the truth. People don’t just come back from the dead for no reason.

I hate how badly I want him, but I can’t look away when he strips off his shirt and laughs at me for staring. He even throws me over his shoulder and carries me off when I’m not doing exactly what he wants.

He’s the biggest asshole I know. But his past is coming back with a vengeance, and we’re all in the crosshairs. He’s the only thing standing between our family and the darkness that wants to tear us apart.

I never thought that I would get into stepbrother romances, but I read Hamel’s Stiff a couple weeks ago and surprised myself by really enjoying it.  When I got an alert that Cocked was on sale, I snapped it up and read it that same night.

It was more or less what I expected.

Lacey is a straight-laced physics student who has never once let someone down.  Camden is a bad boy with a knack for stealing cars and getting mixed up with shady people.  The two were best friends in their early teenage years, transitioned into something more as they started high school, and then parted ways when Camden started hanging out with a rougher crowd.  All of this brought their parents closer together, and his mother eventually married her father.

Now, it’s been years since Lacey and Camden have seen each other.  He disappeared without a trace, leaving his family wondering if he was even alive.  Years of hoping, searching, and seeking out private investigators brought no leads.

But now Camden’s back, trying to escape the Mexican drug cartel he’d gotten involved with, and he’s determined to protect his family from the messed up world he now lives in.

The plot is really very similar to that of Stiff.  Good girl.  Bad boy.  Guy is mixed up with some nefarious people and needs to protect the girl he loves (who happens to be his stepsister) from some kind of danger.  Girl doesn’t really know what she’s doing but tries to help anyway.  It’s fine.  It’s a genre thing and I get that.  I was just hoping for something a little bit different than what I’d gotten before.

Also, I would have preferred to have a bit more interaction between Lacey and Camden.  In Stiff, I could feel the attraction.  I could feel the depth of the relationship.  Here, not so much.  Yes, they have some really hot sex. (Really hot.) But is there anything else to their relationship?  Sure, we get an epilogue with them together years or months later.  (I forget.)  But will they really last?

Instead of interaction between the main characters, we get lost in Lacey’s thoughts.  And Lacey only states the obvious.  That she’s conflicted about her feelings toward Camden.  That it’s stressful trying not to be killed by an angry drug cartel.  That it’s a little off-putting to watch your stepbrother, who also happens to be your ex-lover, and once upon a time was your best friend, kill a man with his bare hands.  I would rather watch their relationship develop than listen to Lacey state the obvious over and over and over again.

So, with all these complaints, why the three stars?

1. I powered through this book.  It kept my interest and I found myself wishing I didn’t have to go to work the next day so that I could have finished it in one sitting.

2. I thought that Camden was actually a pretty well-developed character.  I felt that I understood him and his motives, and that’s more than I can say for a lot of books I read.

3. It was fun!  Even though I could pretty much predict everything happened, it was still enjoyable to read.  And although there weren’t many steamy scenes to be found in this book, the couple that we did get were off the charts.