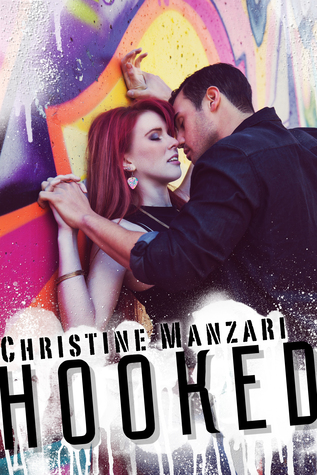 If you ask the confident and snarky skater girl, and she’s in the mood to share, she’ll tell you her name is Cat. She might even tell you that she’s hooked on graffiti, 80s movies, and having fun—the riskier the better. Cat will share a good time with you, but she won’t ever trust you enough to share her heart. It’s protected by secrets and she’d like to keep it that way.

If you ask the confident and rich pretty boy, he might tell you his name is Huck. He might even tell you he loves a challenge and is used to getting his way. He won’t tell you that his life is a mess because he risked his heart by trusting the wrong girl. Huck is ready for a change, he just wasn’t ready to get hooked on someone like Cat.

Huck knows one thing for certain: Love hasn’t done him any favors, but Cat just might be worth the risk.

The thing is, you can be ruined in more than one way. Once you’re HOOKED, what wouldn’t you risk for the chance at more?

This book was such a pleasant surprise!  I’ve had it on my Kindle for months and I’m so glad that I finally decided to read it.

Cat is a tattooed graphic designer from Venice Beach who enjoys skateboarding and graffiti.  She doesn’t do relationships, and she doesn’t talk about her personal life.  Hanging out at the beach with her best friend one night, she notices a that a guy who is way too attractive for his own good can’t seem to take his eyes off her.  The guy turns out to be Huck, an all-American pretty boy who couldn’t be further from Cat’s usual type.  You might say that Cat isn’t Huck’s usual type either, but something draws them together.  Turns out they’re great together, but all of those personal things that Cat refused to talk about end up creating problem after problem after problem in their relationship.

Cat was so stubborn, so opposed to opening up to Huck, that she both intentionally and unintentionally sabotaged their relationship.  Usually, this would annoy me, but in this book, it didn’t.

I think the main reason that I wasn’t annoyed by all of the drama and angst was that it actually fit Cat’s character.  This is a girl who doesn’t do relationships.  She doesn’t trust people.  So, despite her relationship with Huck being nothing less than amazing, she’s quick to doubt it.  When she finds out that Huck’s not exactly a stranger, she runs away.  When things start happening in her personal life that she can’t control, she runs away.  This wasn’t angst for angst’s sake.  This was a normal reaction for the character.

I loved the writing style.  Everything flowed so nicely, from the descriptions to the dialogue.  Steamy scenes, funny scenes, and touching scenes were all equally well-written, which was a nice surprise.  I will definitely keep an eye out for other books by Christine Manzari!