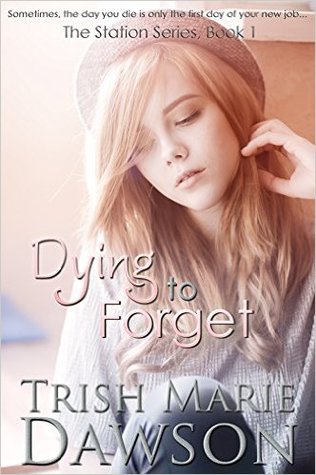 For some, the day you die is only the beginning.

The Station books are part of a YA/NA Fantasy series that follow teenage anti-heroine, Piper Willow, after she dies and wakes up in the afterlife at a place called the Station, and is offered redemption – in the form of a job.

After Piper dies, she gets two choices: enter her own personal hell, or go back to Earth and become the voice of conscience inside a boy’s head. Can she save Sloan from meeting the same fate? A tale of hope that will warm your heart.

This was another Kindle freebie that I finally got around to reading. When I first finished this book, I was kind of ambivalent. Did I love it? Did I hate it? Was it even good? I gave it three stars and decided to let it roll around in my head for a few days before writing a review.

Now that I’ve had time to think about it, I have to say… I’m a little disappointed. I’ve changed my rating to two stars because I’m not entirely sure what this book was trying to do.

Let’s start with the plot. Piper is your average eighteen-year-old girl. She loves hanging out with her best friend, she’s excited to be finishing high school, and she’s thrilled that one of the most popular boys in her grade is finally paying attention to her. Then her life starts crumbling around her as the author delves into topics such as rape, self-harm, the death of a friend, and suicide.

Piper soon finds herself at The Station, a home for those who’ve died by suicide, where she’s told that she can either be alone with her thoughts forever or she can be the voice of reason in a teenager’s mind, trying to prevent them from committing suicide. Piper, of course, chooses to help her fellow teenagers. And, of course, she’s basically the best ever.

So. There are a few things about this book that I am questioning.

First, what is the point of this book? Is it to discuss those heavy topics of rape, self-harm, and suicide? Because, if so, it does a really bad job. After being raped, Piper swears off all men. (Understandable.) But then she spends about five seconds with her first case and is suddenly lusting after every boy she sees? Piper’s depression also seems to be immediately and miraculously cured after she enters The Station. There is really no discussion of anything that led to Piper’s suicide, which seems to be a huge cop-out.

Or maybe this book was supposed to be a romance? Because that’s definitely the vibe I got from Piper’s first case. Piper pops into this guy’s head and is immediately struck by how amazingly attractive he is. She encourages him to make friends but is disappointed when a female friendship for him turns into something more. Despite her repeatedly reminding herself that she’s there to make his life better, she is constantly jealous of him paying attention to other females. Imagine your conscience getting jealous of your relationships. It’s just weird.

And then there’s the book’s whole treatment of depression. Piper’s second case is a girl who is brutally bullied by her classmates. The girl cowers in corners, eats her lunch in the bathroom, and can hardly walk to class without being harassed. Piper has her straighten her hair and put some lip gloss on, and all of a sudden she’s Miss Popular. Her depression is cured. It’s a miracle. I mean… what? Was the author really trying to make the point that a quick makeover will cure depression?

This book ends on a cliffhanger, but I did not enjoy this book enough to find out what happens next. I’ll give it points for its unique premise and its better-than-average editing (for being a self-published freebie), but it really leaves a lot to be desired.