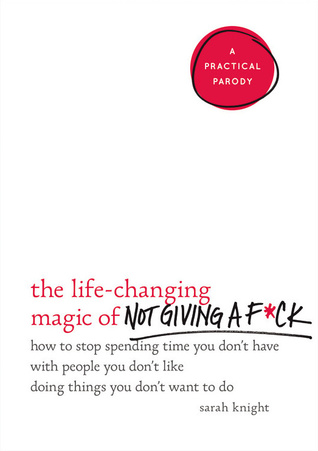 THE “GENIUS” (Cosmopolitan) NATIONAL BESTSELLER ON THE ART OF CARING LESS AND GETTING MORE
Are you stressed out, overbooked, and underwhelmed by life? Fed up with pleasing everyone else before you please yourself? It’s time to stop giving a f*ck.

This brilliant, hilarious, and practical parody of Marie Kondo’s bestseller The Life-Changing Magic of Tidying Up explains how to rid yourself of unwanted obligations, shame, and guilt–and give your f*cks instead to people and things that make you happy.

The easy-to-use, two-step NotSorry Method for mental decluttering will help you unleash the power of not giving a f*ck about:

Family drama
Having a “bikini body”
Iceland
Co-workers’ opinions, pets, and children
And other bullsh*t! And it will free you to spend your time, energy, and money on the things that really matter. So what are you waiting for? Stop giving a f*ck and start living your best life today!

I was a born fuck-giver.  Maybe you are too.  As a self-described overachieving perfectionist, I gave my fucks liberally all throughout my childhood and adolescence. I tackled numerous projects, tasks, and standardized tests in order to prove myself worthy of respect and admiration from my family, friends, and even casual acquaintances. I socialized with people I did not like in order to appear benevolent; I performed jobs that were beneath me in order to appear helpful; I ate things that disgusted me in order to appear gracious.  In short, I gave way too many fucks for far, far too long. This was no way to live.

Alright, so when a book starts like this, it’s kind of obvious that I’m going to love it.  But in all honesty, this book was pretty eye-opening for me.  You see, I too care far too much about what people think of me.  I make my job more stressful than it needs to be by agreeing to help my boss with things that absolutely are not my responsibility.  I make my home life more stressful by operating on the principle that “if nobody else does it, well, I guess it’s my job now.”  I make my anxiety have anxiety by worrying about what literally everybody will think of literally everything I do.

Not giving a fuck – crucially – means releasing yourself from the worry, anxiety, fear, and guilt associated with saying no, allowing you to stop spending time you don’t have with people you don’t like doing things you don’t want to do.

Have you ever thought about exactly how much time and effort you expend in doing things you really couldn’t care less about?  And not to mention the money involved!  How many trips have you taken because you couldn’t bring yourself to say no?  How many extra tasks have you taken on at work because you wanted to improve your reputation?  How many disgusting meals have you choked down for fear of offending the cook?

Sarah Knight gets it.  She worked for years in corporate America, sucking up to the higher-ups, following stupid rules, and doing pointless paperwork.  Then one day, she decided that enough is enough and quit her job to be a freelancer.  No longer having to worry about dragging herself out of bed in the wee hours of the morning, only to chase down a train (twisting her ankle in the process) just so that she could walk into an unappreciative job on time was life-changing.

Obviously, given the title, I wouldn’t suggest picking this book up if you’re sensitive to profanity.  I mean, the word “fuck” appears, in various incarnations, over 500 times in this book.  It appears so many times that my Kindle’s search function can’t even tell me how many.  But it’s that very same attitude (of saying “fuck” at least two times per page) that makes this book work so well.

The point of this book is not to be an asshole.  Knight actually goes out of her way to advise you, above all, to maintain the relationships you care about, not get yourself fired, and generally act like a decent person.  But also to do what makes you happy.  Her motto is you do you.

If you don’t care about your coworker’s venture into homemade all-natural peanut butter, don’t feel that you need to buy six jars.  If you don’t care about an acquaintance’s Kickstarter campaign, just say you have a personal policy against supporting them.  (This was actually brilliant advice – “If I support one, I’d feel like I have to support them all, and I just don’t have that kind of money.”)  If you don’t want to attend the destination wedding of an elementary school friend that you haven’t seen in ten years (and are really wondering why you were even invited), RSVP your regrets.

The amount of time, money, and energy you’ll save by not doing things you’re uninterested in (but feel obligated to do) can be incredible.  Just imagine, she says, you opt out of spending $1000 to attend that destination wedding.  Even if you send your regrets with a nice (let’s say $200) gift, you’ve still saved a net $800.  If you’re of a certain age (let’s say mid-twenties to early thirties) and opt out of every non-BFF and non-immediate family wedding you’re invited to, you could save thousands of dollars over the years.  You can then take those thousands of dollars and put them toward something you do care about, like a new car, or your retirement account, or some really great concert tickets.  As long as you respectfully decline the things you don’t want to do, you’re not going to burn any bridges.

This book might be hilarious – and more than a little profane – but at the end of the day, it has a great message.  I don’t think I’ll go into work tomorrow prepared to tell my boss to do her own paperwork, but I am one step closer to living a better life.