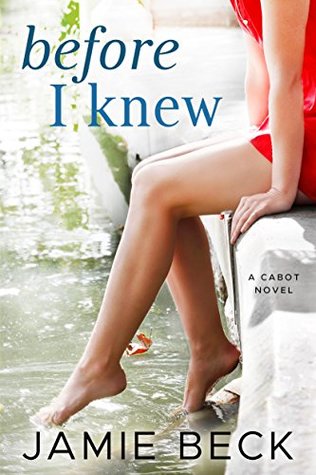 Colby’s life hasn’t been short on tragedy. Her best friend Joe died in a terrible accident and, a few months later, her husband committed suicide. Deciding it’s time for a fresh start, she leaves her life as a lawyer behind and decides to start a restaurant. Hiring Joe’s brother as the executive chef might stir up a lot of emotions, but as a well-known, award-winning chef, Alec couldn’t be a better choice.

In her two years as a widow, Colby hasn’t even attempted another relationship, so she’s shocked when she begins to feel an attraction to Alec. But everything is not as it seems, and both Colby and Alec are hiding their guilt over past mistakes. Can they make a relationship work, or will everything in their past get in the way?

I love romances that start in childhood, especially when it was one-sided and there was a lot of pining. I can say I’m a teensy bit creeped out by the age difference… but what can you do. I also love brother’s best friend romances, and Alec was (and, to an extent, still is) good friends with Colby’s older brother, Hunter. I had expected that I would love this book, but I didn’t.  I really, really, really didn’t.

The beginning of the book wasn’t bad. The pacing was a little uneven, but it had its moments. I liked watching Colby and Alec come to grips with their attraction. There are things in their pasts that make a relationship difficult, but there was always this simmering current of sexual tension running through all of their interactions. Jamie Beck is really good at writing lingering stares, flashbacks, and tension.

Unfortunately, that’s pretty much the only positive thing I can say about this book.

The book is just… so heavy. I wasn’t expecting that, I wasn’t in the mood for that, and it’s obviously reflected in my rating. We have death and suicide and long-lasting reactions and repercussions and the processing of grief and I just wanted a romance. I expected something light and romantic based on the blurb and the cover — maybe a little bit of depth given the suicide aspect — but this isn’t light and it’s not particularly romantic. This book is only 354 pages but I had to force myself to finish it over the course of four days.

One of my biggest pet peeves in a romance is characters who act like children. You’re grown up enough to have a sexual relationship but you’re not grown up enough to get the heck over yourself and have an actual conversation? Drives me crazy.

Colby was so immature. Honestly, she’s like a petulant child. Yes, she’s lived through some very awful things, but her whole thing about “Alec has a temper so he’s probably bipolar” and “I can’t make compromises ever again because I made too many compromises in my marriage” was so frustrating. Everything Alec does gets compared to everything Mark did. Everything they do together gets compared to everything she and Mark did together.

Colby is so stubborn and hard-headed and nobody really calls her out on it. I guess Hunter gives her a tiny bit of a talking-to near the end of the book, but it’s too little too late. Colby makes decisions that clearly have negative effects on her life (and the lives of those around her) and it’s just like everybody goes along with it because she’s Colby. It’s her life. It’s her restaurant. Nobody can say anything.

One of the things that drove me absolutely crazy was Colby’s insistence that she, a lawyer with literally zero food experience, knew how to develop a menu better than an award-winning chef. That she knew better how to run a restaurant than people with actual restaurant experience. Her hard-headedness was so frustrating and I honestly don’t know how Alec put up with it.

Alec wasn’t a perfect character, but he was a lot better than Colby. At least Alec was a pretty consistent character with clear motivations. What exactly does Colby want? Not a successful restaurant, because she’s always ignoring good advice. Not a healthy relationship, because she constantly sabotages it. Not a healthy relationship with her family, either, because she’s always enabling her mother’s manipulation and making excuses for her horrible behavior.

The writing is fine, but the plot leaves a lot to be desired. I wish I would have enjoyed this more. If I weren’t reading this for my TBR challenge, I probably would have DNFed.

I received a free copy of Before I Knew from the publisher (via Goodreads).