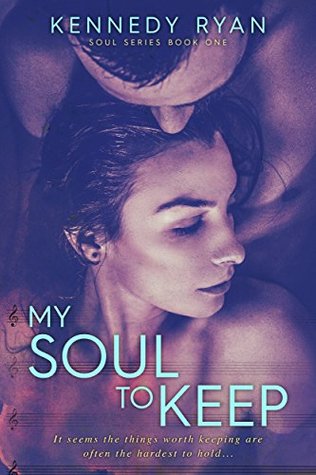 After her mother’s death, Kai moves from a small town in Georgia to Los Angeles to pursue her dream of being a professional singer and dancer. She’s got a lot on her plate — working three jobs to pay off her mother’s medical bills while also working to advance her entertainment career — and no time for romance. Still, when she meets Rhyson, a famous musician, she can’t help but feel a pull.

Kai and Rhys just get each other. They might not make sense on paper, but when they’re together, everything just clicks. The thing is, Kai wants to get to the top on her own. She doesn’t want to be propelled by her boyfriend’s celebrity status and she certainly doesn’t want him pulling any strings for her. Kai is adamant that nothing can happen between her and Rhys until she’s made a name for herself, but how long can the two of them deny their spark?

A couple years ago, this book is all that anybody was talking about in my Facebook readers groups and on Goodreads. Six months ago, this book was offered as a freebie and I snapped it up. Of course, I went on to entirely forget that I had it, but at least I’ve read it now. I had really high hopes for this one because of the positive response from a lot of people whose opinions I trust. Unfortunately, it didn’t really do it for me.

Here’s the thing. The book is really well-written. The characters are fully formed. They feel real. The plot is well thought out and I can tell that Kennedy Ryan is good at what she does. This book is just not for me. Try as I might, I didn’t love it. There was too much back-and-forth and unnecessary drama. Kai was stubborn and Rhys was pushy, and then Kai was pushy and Rhys was stubborn. I wanted to like them together, but there was just too much going on for me to ever put my faith in their relationship.

The book ends on a huge cliffhanger. I feel like I should share that in case you, like me, absolutely loathe cliffhangers. I saw a spoiler for the entire rest of the series (not even marked! thanks!!!) and it pretty much killed any desire I had to read the next two books. I’d love to read something different from Kennedy Ryan since I do believe she’s a great author and this particular book just wasn’t a good fit for me.