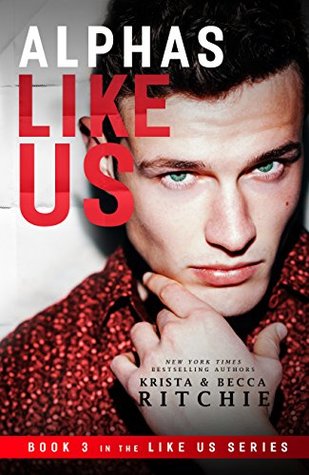 Maverick, know-it-all bodyguard Farrow Keene knows publicly dating American royalty comes with a great cost. Everyone wants a piece of their relationship. And as a protective boyfriend, he’s not here for the malicious hands that grab at their love life and seek to rip them apart.

But Farrow is confident — he’s confident that he could’ve never prepared for the storm to come.

Maximoff Hale isn’t a big fan of change. And to regain the charity CEO position he lost, he agrees to a task that he’s always rejected. One that could uproot his unconventional world.

But Maximoff is afraid — he’s afraid of the consequences that could destroy his boyfriend and his family.

Changes are on the horizon.
Big.
Messy.
Complicated.
Changes.

Maximoff & Farrow will fight for their forever. And with every breath, they promise that their love story won’t end here.

I adore Krista & Becca Ritchie. They make me feel a lot of emotions and I always find myself overly attached to their characters. I’ve given five stars to six of their books. I absolutely devoured Damaged Like Us and Lovers Like Us. I wanted to love Alphas Like Us. I went into it fully expecting it to be another five-star read. But it wasn’t. I feel like the actual worst right now, but this was my least favorite KBR book in recent memory.

I guess it’s inevitable that your favorite authors will put out a book that you just don’t click with every so often. I mean, this was still a solid book. It’s a strong 3.5 from me and I thought the ending was pretty great, so I rounded up to 4. But it’s just not what I expected. I didn’t expect to just like this book. I expected to be floored. Blown away. Speechless.  I have a documented history of this problem when I’m too excited about a book.

I want to keep this review spoiler-free, so I’m not really going to get into any of what happens in the course of this nearly 500-page novel. Strangely, it both feels like a lot happened and absolutely nothing happened, which is another reason that I didn’t enjoy it as much as I’d expected. The book is very heavy on the attraction between Moffy and Farrow, which made sense at the beginning of the series but felt a little forced here. I’m glad that they’re happy and enamored with each other, but does it really need to be repeated on every other page?

One thing that I did really enjoy was how much we got to see the other Hale, Meadows, and Cobalt children. I don’t know if I really want all the children to end up with their bodyguards (KBR will really have to do some finagling to make that seem natural) but I am really and truly feeling the Lunnelly and Thane vibes! This morning, as I casually sipped my Wawa coffee, I found myself thinking about Donnelly and his rather… unprofessional comments toward Luna. (It’s okay, I loved it.) Then I got to thinking about Jane and Thatcher and how excited I am for Tangled Like Us, and then I told myself to get back to work because I’m unfortunately not paid to think about fictional characters.

Side note: KBR mention in their note at the end that they’re planning on returning to Moffy and Farrow’s story in the future. I’m honestly not sure how I feel about that since there are so many other kids to be writing about! I hope that when they decide to release another book, it’ll be more like a novella or a Some Kind of Perfect-style series ender.