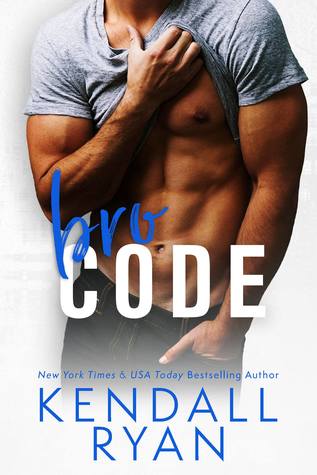 There’s pretty much only one rule when you’re a guy.

Don’t be a douche.

Turns out, the fastest way to break that rule is to fall for your best friend’s sister.

Ava’s brilliant, sharp-tongued, gorgeous, and five years younger than me.

She’s the sexual equivalent of running with scissors. In a word, she’s dangerous. And completely off-limits.

Falling for her could ruin everything.

Yet I can’t seem to stop, even when her company is threatened by a lawsuit, and my promotion hinges on representing the opposing client—and winning.

I can’t see a way out of this mess that doesn’t end in a broken friendship, a broken heart, or a ruined career.

I may have broken the bro code when I fell for Ava. But do I have the balls to handle what comes next?

This was my first read by Kendall Ryan and I loved it!

I immediately fell in love with Barrett and Ava, both individually and together. They had such great chemistry and balanced each other out really well. Barrett is honestly one of the best romantic heroes in recent memory since he was such a great guy. He was really fixated on not violating the Bro Code, but it never really came off in a weird way. He just really appreciated everything that his best friend had done for him over the years and didn’t want to jeopardize their friendship by making a pass at his sister.

Can we talk about the tropes here for a second? This had some of my all-time favorites. Brother’s best friend. Secret childhood crushes. Pining from afar. Barrett and Ava have history together, which makes their relationship that much better. I have no doubt that they made their relationship work.

The book was just so much fun that I couldn’t help but devour it in one day. This might have been my first book by Kendall Ryan, but I hope it won’t be my last.

I received a complimentary advance copy of Bro Code from Inkslinger PR in exchange for my participation in this review blitz. Bro Code is now available.

rk Times, Wall Street Journal, and USA Today bestselling author of more than two dozen titles, Kendall Ryan has sold over 1.5 million books and her books have been translated into several languages in countries around the world. She’s a traditionally published author with Simon & Schuster and Harper Collins UK, as well as an independently published author. Since she first began self-publishing in 2012, she’s appeared at #1 on Barnes & Noble and iBooks charts around the world. Her books have also appeared on the New York Times and USA Today bestseller lists more than three dozen times. Ryan has been featured in such publications as USA Today, Newsweek, and InTouch Magazine.

Visit her at www.kendallryanbooks.com for the latest book news, and fun extras