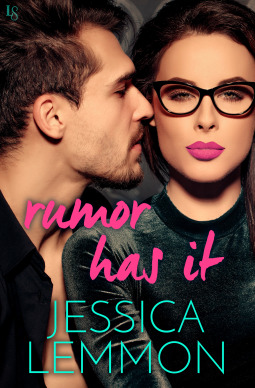 This is one bad boy who’s fit to print. A notorious jock tackles life—and love—after football with a type-A journalist in this sexy standalone from the author of Eye Candy.

Barrett: As a former pro football star, I’m used to playing the field. After injuries cut my NFL career short, my second act as a broadcaster ended on live television when a hot mic picked up a little verbal . . . indiscretion. But this latest publicity stunt might just land me back on top—much to the chagrin of Catarina Everhart, the prissy, beautiful journalist who’s been assigned to date a bad boy (i.e., me) and write about it. Catarina swears I’ll never touch her, let alone kiss those full lips of hers. Based on our chemistry, I’m not buying it. . . .

Catarina: Barrett Fox seems to be doing everything in his power to make me hate him. The cocky egomaniac is infamous for his bad behavior, and now, thanks to my boss’s harebrained schemes, he’s apparently my problem. As one fake date leads to another, I start to see a different side of Barrett. He’s close with his family. He does volunteer work. And, okay, he kisses like a dream. Am I really dating Barrett Fox? Or is he playing me? Because suddenly I’m risking my reputation—and my heart.

I’m a big fan of Jessica Lemmon’s Real Love series, so I was excited to be approved for an ARC of its latest installment, Rumor Has It. I remember Barrett Fox from Man Candy, the third book in the series, where he was Dax’s brash best friend. I didn’t love Man Candy as much as the other books in the series, but I remember wanting to know more about Barrett.

At first glance, Barrett is a huge jerk. He’s the former “bad boy of the NFL,” best known for berating a female referee to the point that he lost his job as a commentator. Now, in the hopes of bolstering his public image, he’s agreed to a publicity stunt that involves fake dating a prissy reporter, a woman who is his complete opposite in every way.

Catarina Everhart is poised, prim, and proper. She’s very rigid, always doing things by the book, never really taking the time to enjoy anything just because. Catarina and Barrett clash. After her boring experience with her (also prim and proper) ex-boyfriend, fake dating Barrett is a culture shock. It’s even more of a shock when Barrett drops the bad boy act and reveals that he’s a total teddy bear.

Overall, I really enjoyed the fourth book in the Real Love series. There were some things that put me off a little bit (Barrett’s initial behavior, his insistence that Catarina is “not like other girls,” the big conflict at the end) but for me, this was a solid four-star read. Davis Price still goes down in history as my favorite love interest in this series, but Barrett Fox and Catarina Everhart made a great pair.

2 thoughts on “ARC review: Rumor Has It by Jessica Lemmon”