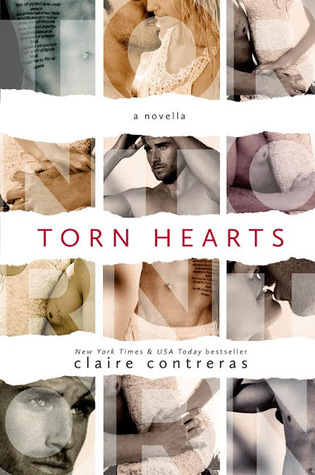 Torn Hearts by Claire Contreras
Series: Hearts #1.5
Rating: ★☆☆☆☆
Links: Amazon • Goodreads
Publication Date: August 17, 2016
Source: Freebie
I met a boy once. He made my heart go into a frenzy every time he looked at me, and my knees go weak whenever he touched me. Our love was so beautiful, that even its demise was bittersweet.

I met a girl once. Her world, full of possibilities, made me feel like even I had a chance at being someone. She believed in me. She loved me. We were so secure, that even our breaking point seemed hazy. Until we reached it.

Here’s the thing: If you’re going to call Paper Hearts book two in the series, I shouldn’t have to read some random novella before I can get started if I’ve already read book one. That would make Paper Hearts book three in the series. If a book is #1.5, it should include some extra information that’s fun for your readers, but it shouldn’t be required reading to understand what happens in the next book. I think I might be in a bit of a mood right now because this is really getting to me.

Anyway, on to the review.

I didn’t love it. I didn’t even really remotely like it. I don’t agree with Jensen’s choices and I feel like I’m not going to enjoy Paper Hearts because of it. This novella includes so many of my romance novel pet peeves that I honestly wish I could stop right here, but, alas, the reading challenge. I have made awful choices this month.

I think I should probably just put it all out there because I know this would be a hard nope from me had I known what it was about going in.

Spoilers under the jump.

Jensen and Mia are super in love. Jensen decides he’s going to move to New York City, so long-distance relationship it is. Here I am thinking, Hey, this is going to be great! Let me read this author’s take on something I myself have lived through! My boyfriend and I have done the whole long-distance thing several times throughout our nearly ten-year relationship. It’s always interesting to see fictional representations of this difficult situation.

I guess that Jensen and Mia have some sort of agreement that they’re free to have sex with whoever they want when they’re apart. I thought they were so in love or whatever, but this is apparently something that they thought would work out well. (Side note: If this kind of arrangement would work for you, more power to you! It clearly doesn’t work for these characters.) It’s not really cheating since they’ve talked it out and preapproved it, but it’s more of an “I’m not going to ask and you’re not going to tell me” kind of situation.

But uh oh, Jensen comes home to see Mia and he’s all broody and dramatic and needs to talk to her but not right now. That always bodes well in a romance novel, right?! Eventually Mia forces it out of him. He’s gone and impregnated some random girl in New York, and now he’s going to marry her.

It’s not bad enough that you evidently forgot what a condom was while you were having sex with someone who’s not your girlfriend, but now you’ve decided to marry her? I have no sympathy for Jensen. He made his choices and now he has to live with them. There’s no law that you have to marry this random girl. I know that personally, had I been impregnated by some random man, I would not be falling all over myself to marry him. What if he’s crazy? What if we didn’t get along? I’m too much of a worrier for that. I guess Jensen’s new wife isn’t.

If Jensen and Mia had really and truly been in love, they would’ve figured it out. But no, cue the messy breakup and tears and just leaves.

Five years later, Jensen and Mia see each other again at a friend’s wedding. They still have feelings for each other. He’s married with a child, but I’m pretty sure they’re going to act on them.

In short: If the entire premise of your romance is that your hero “accidentally” impregnates another woman, maybe that should be somewhere in the blurb.

I don’t really need to know what happens next, but stay tuned for my review of the actual book, Paper Hearts.