I was tagged by Christine @ Life With All The Books to do the Ultimate Book Tag! Somehow I had never done this one before, so thank you for tagging me!

1. Do you get sick while reading in the car?
Yes, and it’s so annoying. All my life, I’ve wanted to be able to read on long drives. I’ve resigned myself to listening to audiobooks.

2. Which author’s writing style is completely unique to you and why?
Probably Maggie Stiefvater. I don’t think I’ve ever read anything with quite that same spooky atmosphere.

4. Do you carry a book bag? If so, what’s in it (beside books…)?
Well, I haven’t carried a bookbag in ages but I do carry a large handbag which contains, aside from my Kindle and physical books: 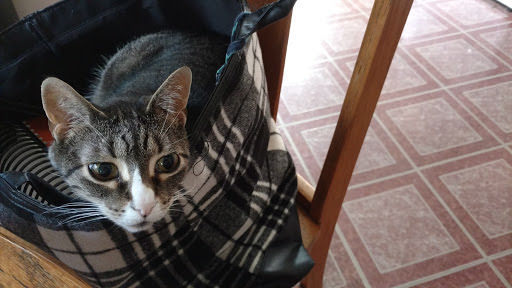 5. Do you smell your books?
I like the smell of books, but I don’t usually shove my face in them.

7. What book did you love while reading but discovered later it wasn’t quality writing?
I don’t know if I really have an answer for this! I guess I really liked The Help when I read it (and I posted a five-star review of it) but then when I actually think back on it, I realize that’s it’s a pretty problematic book. That’s nothing to do with the actual writing, though.

8. Do you have any funny stories involving books from your childhood? Please share!
My best story is probably the one involving Mr. Popper’s Penguins and how when I learned to read it (kindergarten) my principal paraded me around and made me read it to every classroom in the school. That was actually pretty embarrassing at the time and not very funny, so let me try again…

9. What is the thinnest book on your shelf?
I didn’t go around checking the page counts or anything, but I’m pretty sure it’s Identity by Milan Kundera.

10. What is the thickest book on your shelf?
Probably the complete works of William Shakespeare, which I bought during the approximately two weeks I was obsessed with him in high school. If not that one, it’s my Oxford Spanish dictionary, which I haven’t used since probably 2012 since that’s when I took my last college Spanish course.

11. Do you write as well as read? Do you see yourself being an author in the future?
I wish I could write but I have trouble finding something I want to write about and then I’m really bad about letting other people read it! I do write books in my head when I can’t fall asleep, though. They just never make it onto paper.

12. When did you get into reading?
I’ve been into reading for as long as I can remember. Even when I was a little toddler, my grandma used to joke about how she’d offer to read me one book before bed and I’d bring her a pile of ten or twenty.

13. What is your favourite classic book?
I don’t read a ton of classics! Probably Pride and Prejudice, which is likely greatly influenced by basically doing a buddy read with my best friend during my junior year of high school. We’d read chapters while sitting across from each other and then talk about them and it was the actual best thing. Somebody, please try to replicate this feeling with me across the internet!

14. In school what was your best subject?
I don’t want to be like… that person… but I was super nerdy in high school and so I’m not really sure I had a “best” subject. But if we’re talking what I enjoyed most, then English. I took double English classes my junior and senior year and then when I got to college I took a bunch of lit classes as electives.

15. If you were given a book as a present that you had read before and hated… what would you do?
Smile and say thanks? I was raised to be really polite so I can’t imagine that I’d do anything else.

16. What is a lesser known series that you know of that is similar to Harry Potter or the Hunger Games?
I don’t read a lot of dystopian or magical series, sorry!

17. What is a bad habit you always do (besides rambling) while filming?
So I don’t really film myself… like ever… but one time I made a short film in college for a Library and Information Studies course! I don’t know what ever happened to it and I wish I could find it because I’m sure it’s terrible and cringey and hilarious! I don’t know if you ever watched College Life, but it was on MTV back in 2009 and it was set at my college. It was this whole big thing because the university was always going on about how they didn’t endorse it and it wasn’t representative of the college experience and whatever. My group did a parody of it and I was so proud of it! I did the intro and the credits and the soundtrack and I talked on camera a lot. Anyway, aside from rambling, my biggest bad habit was probably not making eye contact, so I was always looking at the floor or off in the distance somewhere and generally being really awkward. I think I interviewed some random people who gave halfhearted and only semi-related answers, so that was also great.

20. Vampires or Fairies? Why?
Fairies, I guess? Mostly because I read too many books about vampires when I was in high school. I’m not super into paranormal books these days.

22. Spirits or Werewolves?
Spirits, just because the I feel like it’s hard to pull off a believable werewolf story. But, again, preferably neither.

23. Zombies or Vampires?
Ugh, neither one. What’s with all the vampires??

25. And Finally: Full on romance books or action-packed with a few love scenes mixed in?
You probably already know that I’m going to pick full-on romance! I’m also okay with action-packed. I’ll really read anything. I’m not that picky.

I’ve seen this one floating around a bunch, so I’m not going to tag anyone to do it. If you haven’t already done it, please do! I’d love to see your answers!

I guess I wasn’t technically tagged to do the BW Mid Year Tag, but Caidyn & Chantel tagged anyone to do it, so I’m going to say that counts. It sounds like so much fun and I love that there are questions about tv shows, movies, and music in addition to books! So, without further ado, let’s get to it.

1. Where are you on your Goodreads challenge? Ahead or behind?
I am so far ahead on my Goodreads challenge and I don’t really know how it happened. At this time last year, I was like six or eight books behind and totally freaking out about how I was going to catch up. I’m literally fifty-two books ahead right now. I don’t feel like I read enough to be fifty-two books ahead.

2. Have you really been reading your Top Ten (remember to link) books of the year?
So I’m guessing this is like the top ten books I wanted to read in 2018? If we’re talking this Top Ten Tuesday post (books I didn’t read in 2017 but will definitely read in 2018) I’m somehow at 10/10. (What? I achieved a goal? Sounds fake but ok.) There was also this Top Ten Tuesday post about 2018 releases I was excited about and I’m at 3/10, which sounds more like me.

3. Are you going to change some of your Top Tens halfway through?
I don’t think so. If I keep my current top ten list I still need to read:

If you think I should read something else instead, let me know!

4. What are your top five books so far this year?
Some five-star books this year:

But, honestly, I’ve had seventeen five-star books as of mid-June, so this is going to be an even harder question at the end of the year.

5. Any new releases you’re excited for?
I’m really excited for The Lady’s Guide to Petticoats and Piracy by Mackenzi Lee. Also 99 Percent Mine by Sally Thorne, the wait might actually be killing me. And Josh and Hazel’s Guide to Not Dating by Christina Lauren. Basically, I am excited for every book that’s coming out in the next six months, but I’ll stop there.

6. Favorite character of a new (either released this year or new to you) book this year?
I’m going to say… Bailey from Alex, Approximately just because we’re so similar.

7. What’s a book you regret not having read so far this year?
That would probably be The Astonishing Color of After by Emily X.R. Pan, which has such great reviews and has been sitting on my nightstand for like three full months and I’m sorry but I just haven’t read it yet.

8. What are your favorite TV shows/movies you’ve watched this year?
I’ve only watched two movies this year (I know! I know!!) but they were both good. Love, Simon was, of course, amazing. The other one I watched was When We First Met and it was super cute! I only watched it because my friend texted me every night to ask if I’d watched it yet, and let’s be honest, that’s the way to get me to do anything. Just keep texting me.

For tv shows, I loved Aggretsuko! If you’re a woman in your 20s in an office job, I’m sure you’ll relate. (Even if you’re not, you’ll probably think it’s funny.) I also always love Bob’s Burgers and Riverdale.

9. What do you really want to watch before the year is out?
I want to watch season 4 of Unbreakable Kimmy Schmidt but I already started that. I’m also excited for season 3 of both The Good Place and Riverdale. I actually don’t watch a ton of tv. (It’s how I have so much time to read.)

10. What’s one song you’ve become obsessed with?
I love, love, love IDGAF by Dua Lipa. I told my boyfriend that he better watch out because I’m prepared if my best friend catches him creepin.

I’ve also been listening to a bunch of Ben Folds recently. I’m not really sure what happened, but I’m really into him again all of a sudden! Mostly I’ve been listening to You Don’t Know Me and do you think my brain is trying to tell me something with these songs???

11. What are your favorite songs/albums so far?
I guess it was released at the end of 2017, but I still love Reputation by Taylor Swift. If you’re wondering, my favorite songs are (currently): King Of My Heart, Dress, and Getaway Car.

Other albums on regular rotation in my car are Everything in Transit by Jack’s Mannequin (favorite songs: MFEO Pt. 1 and Holiday From Real) and North by Something Corporate (favorite songs: Ruthless and Space). Both of those are throwbacks to when I was an emo teenager.  Also Glitterbug by The Wombats (favorite songs: all of them, but especially Greek Tragedy and Emoticons), and, of course, more Taylor Swift.

I guess I haven’t really been listening to a lot of new music this year.

I’m not tagging anybody in this one since I just did it for fun, but I would love to see your answers if you feel like playing along! If you do it, please tag me in it so I can see! And, as always, if you like to be tagged in things, let me know! The most stressful part of a tag is figuring out who to tag back!