I don’t usually talk about physics, but today I’m bringing you two non-fiction physics book reviews! I understand very little physics. In fact, I barely scraped by with a C in my high school physics course. (That horrible class kept me from being valedictorian, but it’s fine. It’s fine! I might still be bitter ten years later, but it’s fine.) Coincidentally, I started dating a boy just after high school who was very interested in physics. Ten years later, he’s got a Ph.D. in Astrophysics from Princeton. I still understand very little of it.

My uncle (who is also rather into physics) sent me a copy of The Quantum Labyrinth several months ago in hopes that I would gain more of an understanding of the field. Or maybe, if not the field, a little bit of what makes some people so interested in physics. I was also eagerly anticipating Neil deGrasse Tyson’s Astrophysics for People in a Hurry, so what better than to combine the two into one post? 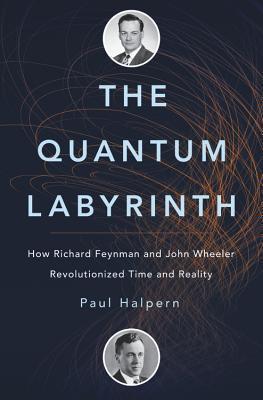 The story of the unlikely friendship between the two physicists who fundamentally recast the notion of time and history.

In 1939, Richard Feynman, a brilliant graduate of MIT, arrived in John Wheeler’s Princeton office to report for duty as his teaching assistant. A lifelong friendship and enormously productive collaboration was born, despite sharp differences in personality. The soft-spoken Wheeler, though conservative in appearance, was a raging nonconformist full of wild ideas about the universe. The boisterous Feynman was a cautious physicist who believed only what could be tested. Yet they were complementary spirits. Their collaboration led to a complete rethinking of the nature of time and reality. It enabled Feynman to show how quantum reality is a combination of alternative, contradictory possibilities, and inspired Wheeler to develop his landmark concept of wormholes, portals to the future and past. Together, Feynman and Wheeler made sure that quantum physics would never be the same again.

I often think that I should read more academic-type books. You know, books that actually teach me something rather than just being fun. The Quantum Labyrinth definitely fits the bill. It’s well-written (though it can be a little dense at times) and the references to familiar places, names, and theories helped me slog through the more technical sections.

Going into this book, I knew next to nothing about John Wheeler, Richard Feynman’s friend and advisor during his years at Princeton. I have read a bit about Feynman himself since I read What Do You Care What Other People Think? a number of years ago. (Pre-blog and even pre-Goodreads account, it seems.) It surprised me to learn how interconnected the physics world was back in the 1940s. Imagine just popping over to Einstein’s house (coincidentally right down the street from where I used to live) or inviting Niels Bohr over for tea!

I don’t know that I’d recommend this for the average reader (it’s certainly not something that I would have picked up on my own) but it’s a good read for anybody interested in physics.

The essential universe, from our most celebrated and beloved astrophysicist.

What is the nature of space and time? How do we fit within the universe? How does the universe fit within us? There’s no better guide through these mind-expanding questions than acclaimed astrophysicist and best-selling author Neil deGrasse Tyson.

But today, few of us have time to contemplate the cosmos. So Tyson brings the universe down to Earth succinctly and clearly, with sparkling wit, in tasty chapters consumable anytime and anywhere in your busy day.

While you wait for your morning coffee to brew, for the bus, the train, or a plane to arrive, Astrophysics for People in a Hurry will reveal just what you need to be fluent and ready for the next cosmic headlines: from the Big Bang to black holes, from quarks to quantum mechanics, and from the search for planets to the search for life in the universe.

So, as I said, astrophysics really isn’t my forte. Words are more my thing. I’m also pretty decent at explaining anything that can happen to your skin, since I have, after all, worked in dermatology for six years. But astrophysics? That whooshing noise you just heard is all of it going straight over my head. You should have seen me at an astrophysics conference in Scotland in 2015. I tagged along because, hello, extraordinarily discounted trip to Scotland?!? But yeah, I was a deer in the headlights the entire time. Good thing some of the other guys brought their wives and children. I might have died otherwise.

I figured that Neil deGrasse Tyson might be a good person to explain astrophysics to me. He seems like a good guy in interviews. But… I don’t know, I feel like this book might be a little too basic? It’s easy to understand and it’s well-written, but I don’t think I learned a single thing that I hadn’t already picked up from my horrible high school physics course and all of the million meals I’ve been forced to consume with large groups of physicists. I don’t consider myself well-versed in the topic — like, at all — but I didn’t really get anything new out of this.

I’d recommend it as a very basic intro to the field, but not necessarily for someone who already knows what astrophysics is and is looking to learn more.

Have you read either of these books? How do you feel about physics?
Let’s talk in the comments!