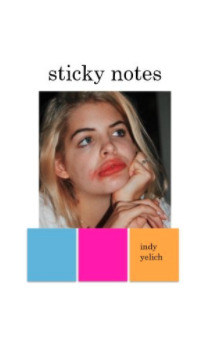 Sticky Notes by Indy Yelich
Rating: ★★★☆☆
Links: Amazon • Goodreads
Publication Date: February 14, 2018
Source: Daniel sent this to me because he is the actual best.
‘sticky notes’ is the first book of poetry by emerging poet, indy yelich, who was born to a poet mother and is the sister of pop artist, Lorde. She currently lives independently as a 19 year old in New York City. This debut collection chronicles her experiences with love, travel, and self-discovery in a shifting physical and emotional geography.

If you’ve been following my blog and reading my tags and Weekly Updates, you probably won’t be surprised to hear that I’m a Lorde fan. I listen to her music pretty incessantly, but I didn’t actually know that much about her or her family. I knew that she had a sister, but I honestly never really paid that much attention. Well, now I’ve read Indy’s first poetry collection and I. Am. Conflicted.

Like, okay, there’s one poem. It’s called the kitchen bench and I’m not sure why I relate to it so much, but I do.

wondering why it tastes
so off

Why does this take me right back to a very specific time in my life? It’s almost creepy how easily it transported me back to approximately 2010 when I was in my first studio apartment and very sad about everything in general.

There are also a couple lines in a poem called hero that I particularly enjoyed:

Literally me, okay? LITERALLY ME.

But then there are some other poems, or should I say “poems,” that are just sentences with line breaks. One example is central park:

That’s it. That’s the poem. I mean, accurate statement, I have literally never been in Central Park without thinking, “oh hey, wouldn’t it be nice to stay here a little bit longer” but here’s a “poem” from me:

I actually had a lot of thoughts about a lot of poems in this collection, but I think that this will suffice for the review. I mean, I probably shouldn’t copy down every poem in the collection and give my reactions to it. That might be considered, oh, I don’t know, a violation of the copyright or something.

Have you read Sticky Notes? Do you follow Indy on social media?
Let’s talk in the comments!