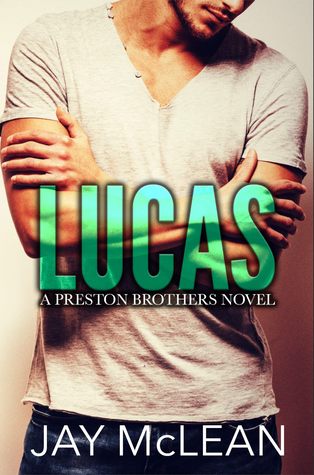 In a sprint, every millisecond counts. When you’re waiting for love, those milliseconds can feel like eons.

High school senior Lucas Preston has it all: star of the track team, a scholarship waiting for him, an apartment to himself and a revolving door of girlfriends. He also has an older sister, five younger brothers and a father who relies on him to make sure those brothers don’t kill each other.

His saving grace? Lois “Laney” Sanders, a girl he started to fall in like with when he was just eleven. A girl who became his best friend, his confidant, his courage.

It took only sixteen clicks and eight seconds for Lucas to realize that his like for Laney had turned into love. Eight life-changing seconds.  It’s also the exact length of time it took to lose her.

For my first #killingthetbr book of September, I went with one that’s actually been on my TBR for a long time. I’d seen a ton of positive reviews for Lucas, so I was crossing my fingers that maybe, possibly, hopefully, I would actually enjoy a book that I read. And… I didn’t hate it. I really didn’t. There’s nothing necessarily wrong with it from an objective standpoint. It just wasn’t for me.

I just have so many questions and comments. Some of them may be considered spoilery, so…

I’m pretty sure that this is the angstiest book I’ve ever read. It can also be pretty over-the-top at times. It’s not badly written, it’s just not my thing. I liked it better at the beginning when it was cute than I did by the end. I would also argue that it veers more toward new adult than young adult, just given the subject matter and sexual content.

I’d recommend this if you’re looking for something angsty and dramatic. If not… maybe steer clear of this one.

Have you read Lucas? Should I give Jay McLean another try?
Let’s talk in the comments!

Today is a very special day! I’m teaming up with Daniel, my absolute favorite blogger, to do a joint giveaway! Daniel recently hit 100 followers, I recently hit 900 followers, and both of us want to say thank you for your support!

I honestly can’t believe this is happening — when I decided to move my blog from Tumblr to WordPress, I never thought I would find such an amazing and supportive community, but here we are. Thank you so much for every comment, every like, and for clicking that follow button and letting me know that you actually want to listen to me ramble about books.

I hope that you’ve clicked the follow button for Daniel, too, so that you can enter our giveaway and maybe win a book!

The rules for the giveaway are pretty simple!