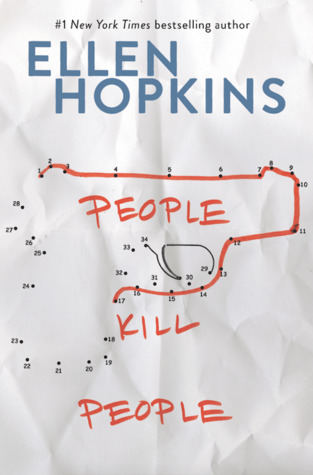 A gun is sold in the classifieds after killing a spouse, bought by a teenager for needed protection. But which was it? Each has the incentive to pick up a gun, to fire it. Was it Rand or Cami, married teenagers with a young son? Was it Silas or Ashlyn, members of a white supremacist youth organization? Daniel, who fears retaliation because of his race, who possessively clings to Grace, the love of his life? Or Noelle, who lost everything after a devastating accident, and has sunk quietly into depression?

One tense week brings all six people into close contact in a town wrought with political and personal tensions. Someone will fire. And someone will die. But who?

I mentioned in one of my recent Weekly Updates that Daniel’s review of this book made me want to pick it up immediately. I actually wasn’t planning to literally read it immediately, but when I went to return a couple library books, there it was on the New Arrivals table and it felt like a sign. I came home and pretended I had something better to do with my time before finally giving in and reading it.

It was so good. I finished it in two sittings and my heart is completely broken.

The thing about this book is that it’s very sad, but it’s sad in a way that’s also very realistic. I don’t want to think about how real these characters are. That any kid who lives down the street from me might be in one of these situations. That some of my classmates when I was in school might have been in similar situations. The circumstances of these kids’ lives are heartbreaking and I think that was the hardest part of this book for me.

In addition to gun violence, this book tackles a lot of tough topics. I generally don’t like it when a book tries to address this many issues. When an author tries to address racism, nationalism, immigration, sexual assault, domestic violence, mental illness, teen parents, murder, homelessness, and more all in one 448-page book, it usually doesn’t work. It might feel forced or incomplete. But somehow, Hopkins did justice to every single topic. I don’t know how she did it, but she 100% succeeded with this book. I was so impressed.

It’s been at least ten years since I read anything by Ellen Hopkins, but now I want to go back and catch up on everything I’ve missed.

Have you read People Kill People? Is it on your TBR?
Let’s talk in the comments!