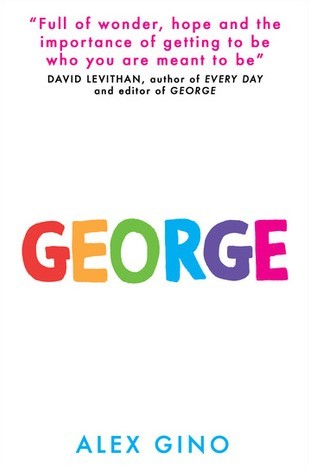 George thinks she’ll have to keep this a secret forever. Then her teacher announces that their class play is going to be Charlotte’s Web. George really, really, REALLY wants to play Charlotte. But the teacher says she can’t even try out for the part . . . because she’s a boy.

With the help of her best friend, Kelly, George comes up with a plan. Not just so she can be Charlotte — but so everyone can know who she is, once and for all.

George stopped. It was such a short, little question, but she couldn’t make her mouth form the sounds.
Mom, what if I’m a girl?

I’ve actually been planning to read George for a long time. I think I added it to my TBR during Banned Books Week two years ago. (Clearly, I didn’t get around to it.) January’s Monthly Motif was diversity, so I planned to read it then too. (Clearly, I didn’t get around to it then either.) I saw it was available at my library a couple weeks ago and checked it out and I’m so glad that I did!

There’s a lot to love about this book. I love that it’s written in a way that’s so simple and so easy to understand. For the reader, there’s never any confusion about whether George is a boy or a girl. And when other characters mistakenly refer to George as a boy, it’s so clear that makes her sad. It’s an important lesson for kids (or anyone, really) about how seemingly small things can really make a difference in the way we make people feel.

There’s also a great lesson on acceptance in this book. There are certainly a lot of characters, both children and adults, who make fun of George or don’t understand her. But I don’t think it’s a spoiler to mention that, at the end of the book, the people in George’s life accept her for who she is. After all, this is a middle-grade book. It has to have a happy ending.

Overall, this was a great book with a really simple yet powerful lesson. I would highly recommend it to just about anyone.

Have you read George? Do you know of any similar books?
Let’s talk in the comments!