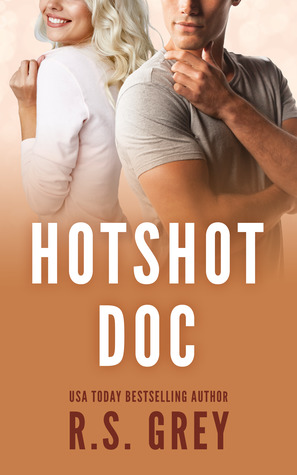 Dr. Russell has a bad reputation around our hospital. The scrub techs say he’s cold-blooded, the nurses say he’s too cocky for his own good, and the residents say he’s the best surgeon in the world—really, just a swell guy!—on the off chance he’s within earshot.

I try to avoid him and his temper at all costs. It’s just as easy to admire his sexy, grip-it-while-he’s ravishing-you hair and chiseled jaw from a healthy distance, preferably from the other end of the hallway half-hidden behind a plant.

Unfortunately, my plan crumbles when my trusty ol’ boss decides to swap his white coat for a Hawaiian shirt. His retirement leaves me with two terrible options: switch specialties and spend months retraining, or take an open position as Dr. Russell’s surgical assistant.

That means I have to stand near him in the OR for hours on end and anticipate his every need without letting his biting words and bad attitude intimidate me. Oh, and as if that’s not difficult enough, my silly crush on him—the one I’ve tried to stomp on until it disappears—might just be reciprocated.

I take my job seriously. There will be no smoldering bedroom eyes across the operating table, no angry almost-kisses in the storage closet. (Well, no more of those.)

What’s the phrase? An apple a day keeps the doctor away?
Maybe I should go for a whole damn bushel.

It’s really no secret that R.S. Grey is one of my all-time favorite authors. This is the tenth book of hers that I’ve read (and the fourth that she’s published just this year!) and I’m not really sure how she always writes books that are so good, but she does. I’ve come to expect greatness from her, and she usually delivers. Hotshot Doc was no exception.

I’ve been in a little bit of a reading slump lately and I’ve been finding it pretty difficult to focus on a book. This book, though? I read it in two sittings. I probably could have finished it in one if I hadn’t had a Christmas party to attend.

This book checked a lot of my boxes. It’s a romantic comedy. It’s a workplace romance. It features one of my favorite tropes, enemies-to-lovers. The heroine is independent and strong and feisty. The hero is a little broody but secretly a great guy. But there were also some things that I didn’t love.

First, I was missing a lot of the sexual tension that I’ve come to expect from R.S. Grey’s enemies-to-lovers romances. I definitely felt the tension at the beginning as Bailey and Matt argued, but it seemed like they went straight from disliking each other to being cute and cuddling on the couch and I missed the buildup to that.

I also felt like this wasn’t as romantic or as funny as her romantic comedies usually are. And that’s fine, but when I read an R.S. Grey book, I expect to have at least a couple moments where I laugh so hard that I have to put the book down for a minute and at least a couple of scenes where I have to fan myself and thank the heavens that I’m alone. While there were some chuckles and some fairly sexy scenes in this book, they weren’t at the level that I’ve seen in her other books.

And finally, the ending. No spoilers, but I felt like things moved so quickly at the end of this book. I don’t even know how to explain this without spoiling the ending, but the heroine made some probably unrealistic decisions that seemed a little out of character.

Still, despite the negatives, this was a really great book! R.S. Grey is a great romance author and I’ve never disliked anything of hers that I’ve read. I would highly recommend this if you’re in the mood for a cute romance with a sassy heroine and minimal angst.

Previously: The Allure of Dean Harper • The Allure of Julian Lefray • Anything You Can Do • Arrogant Devil • The Beau & The Belle • The Fortunate Ones • The Foxe & The Hound • Not So Nice Guy • Scoring Wilder

Have you read Hotshot Doc? Do you like the enemies-to-lovers trope?
Let’s talk in the comments!