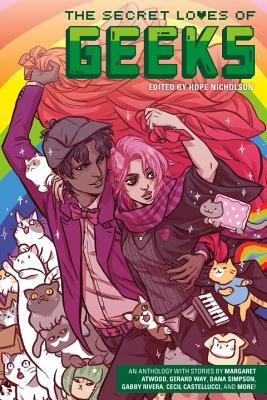 The Secret Loves of Geeks by Hope Nicholson

Cartoonists and professional geeks tell their intimate, heartbreaking, and inspiring stories about love, sex and dating in this comics and prose anthology, a follow-up to 2016 best-seller The Secret Loves of Geek Girls.

Normally, when I review an anthology, I break it down into mini-reviews for each story and then average the ratings. But this anthology… it was too long for that. Or maybe “long” isn’t the right word. There was a lot going on in this one.

Let’s start with why exactly I read this one. I read it because I went upstairs in my library to see if they’d gotten any new graphic novels in (they hadn’t) and then turned into the teen section, even though it makes me feel super old to go in there. (Everybody in that section is like thirteen years old! It makes me feel ancient!) Anyway, I looked at the table of featured books and saw this one. Not only is the cover full of cats (instant way to my heart), but it features a story by Patrick Rothfuss!

As with many anthologies, I was a big fan of some of the work and also disliked a bunch of it. I tended to like the comics more than the essays, mostly because I didn’t expect flat-out essays in a book with this kind of cover and this kind of title that I found in the YA section.

I think my favorites were Margaret Atwood’s comic and Patrick Rothfuss’s essay.

Have you read The Secret Loves of Geeks? What’s the best anthology you’ve read recently? Let’s talk in the comments!