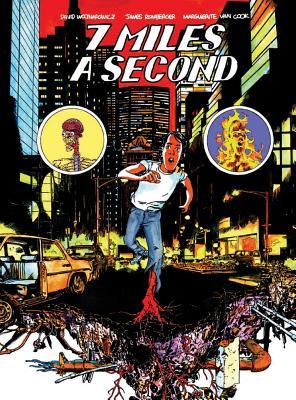 7 Miles a Second is the story of legendary artist David Wojnarowicz, written during the last years before his AIDS-related death in 1992, and drawn by James Romberger with colors by Marguerite Van Cook. The graphic novel depicts Wojnarowicz’s childhood of prostitution and drugs on the streets of Manhattan, through his adulthood living with AIDS, and his anger at the indifference of government and health agencies.

Originally published as a comic book in 1996 by DC’s Vertigo Comics, an imprint best-known for horror and fantasy material such as The Sandman, 7 Miles a Second was an instant critical success, but struggled to find an audience amongst the typical Vertigo readership. It has become a cult classic amongst fans of literary and art comics, just as Wojnarowicz’s influence and reputation have widened in the larger art world. Romberger and Van Cook’s visuals give stunning life to Wojnarowicz’s words, blending the gritty naturalism of Lower East Side street life with a hallucinatory, psychedelic imagination that takes perfect advantage of the comics medium.

This new edition will finally present the artwork as it was intended: oversized, and with Van Cook’s elegant watercolors restored. It also includes several new pages created for this edition.

I think I first heard about 7 Miles a Second when I was scrolling through a Goodreads list of highly-rated graphic novels. It’s definitely not a book that I would have picked up on my own — neither the plot or the art style really grabbed me — but it was surprisingly good.

This book might be short (it’s only 68 pages!) but it packs a big punch. It’s a whirlwind of emotions as the author describes his childhood (be prepared for graphic scenes of prostitution and abuse) and eventual diagnosis of AIDS. It’s an uncomfortable read, but an important one.

I think it would be wrong to say that I enjoyed this since mostly it just made me want to cry. Even so, I have to recognize the sheer amount of emotion the author made me feel in so few pages. This book won’t be for everyone, but if you’re interested in the subject matter and you’re okay with being pushed out of your comfort zone, it’s definitely a worthy read.

Have you read 7 Miles a Second? Is it on your TBR?
Let’s talk in the comments!

7 thoughts on “Book review: 7 Miles a Second by David Wojnarowicz”