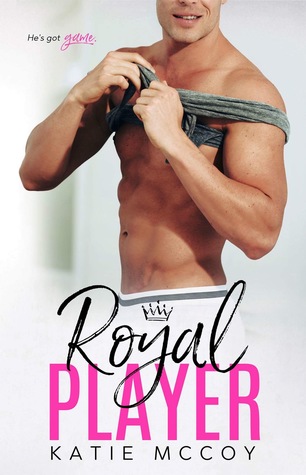 Charlie Davenport is the bad boy of British tennis – and third in line to the throne. He’s a beast on the courts, and a wild animal in bed (according to all the tabloids). Girls are lining up for chance at his crown jewels, and when I stumble into the wrong Wimbledon dressing room and catch a glimpse of his game, set, AND match, I can see why.

So what’s a little good luck kiss between f̶r̶i̶e̶n̶d̶s̶ strangers?

I know better than to get involved with a bad boy like Charlie. But now he’s on a winning streak, he thinks I’m his lucky charm – and you know what’s luckier than a kiss?

Suddenly, I’ve got paparazzi on my trail, exes coming out of the woodwork — and you don’t know ‘cutthroat’ until you’ve seen a pack of hungry socialites set loose near the Royal Family.

I’m in way over my head, and even worse – I’m falling in love. Can this American girl win her Prince Charming? Or will we both crash out of the championships in flames?

Wimbledon-meets-The Prince and Me in this hilarious, sexy new romance from Katie McCoy!

Fun fact: I asked for my boyfriend’s help with choosing one of my March titles for my Killing the TBR challenge. After looking through my Kindle library, he settled on this book because the guy on the cover is putting his shirt on instead of taking it off, and it featured royalty. The royalty thing ended up being a pretty convenient coincidence, because March’s Monthly Motif had to do with royalty too.

This book wasn’t really what I expected, though it was very trope-heavy and predictable. It’s a light story, mostly very fluffy, about a young woman who goes to England to work at Wimbledon with her friend. While there, she meets a prince who also plays tennis and they fall in love. That’s really just about the entire story. The book required absolutely no brainpower to read, which was actually a good thing, because I was reading it after spending like ten hours moving and cleaning and being generally exhausted.

I’d maybe have given it three stars since it was a very quick, very easy read, if not for the absolutely ridiculous conflict that got entirely blown out of proportion. I’m not going to spoil the conflict (and therefore the ending) but I do want to say that no sane person would react to Emmy’s “secret” the way Charlie did, and no sane person would take him back after that reaction.

All in all… I can’t really recommend this one unless you’re looking for the easiest book you’ll ever read.

Have you read Royal Player? Can you recommend any good royal romances?
Let’s talk in the comments!