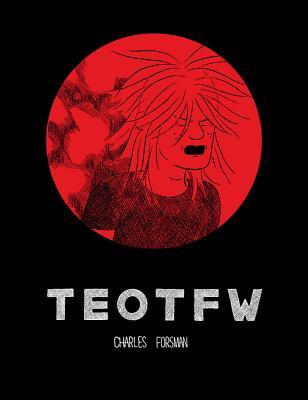 Meet James and Alyssa, two teenagers facing the fears of coming adulthood. As their story is told through chapters which alternate each character’s perspective, however, this somewhat familiar teenage experience takes a more nihilistic turn. With James’s character becoming rapidly more sociopathic, they are forced to take a road trip that owes as much to Badlands as The Catcher in the Rye, and which threatens both their futures forever.

One of the most talked about graphic novels of recent years, The End of The Fucking World marks Charles Forsman’s UK debut.

Maybe a year or so ago, I marathoned the entirety of TEOTFW on Netflix in one day. I really enjoyed it (clearly, since I rarely watch TV to begin with, let alone marathon a whole season in one sitting) but never knew that it started out as a book until I read Ally’s post about book covers. My library didn’t have this graphic novel, but luckily, hoopla saved the day.

Based on how much I enjoyed the show, I kind of expected to love this book. I can’t say that I disliked it, but for once, I think the adaptation was better. For one, the actual story in this graphic novel was very… basic. It seems to be written using as few words as possible, which can sometimes work, but in this case, left a bit to be desired. The whole plot felt very choppy and oddly paced, with more attention being given to a drunken dance than to the actual climax of the story.

The art itself was fine, but definitely not my favorite. It’s a very minimalist style of drawing, which sort of fits with the whole vibe of the book, but wasn’t the most interesting thing to look at.

Overall, this wasn’t a bad graphic novel (I did give it three stars, after all) but I think I’d have to recommend watching the show rather than reading this. The show expands a lot on the source material, giving a lot more depth to both the characters and the plot. If you’ve seen the show and read the graphic novel, I’d love to know whether you agree or disagree with my opinion.

Have you read TEOTFW? Did you watch the show?
Let’s talk in the comments!

9 thoughts on “Book review: The End of the Fucking World by Charles Forsman”