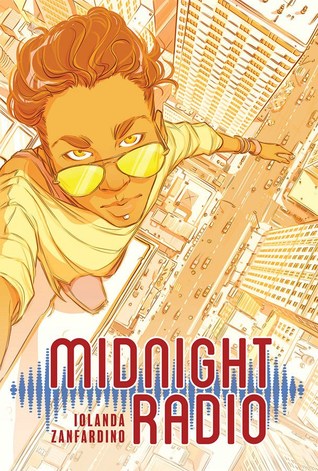 An intriguingly interwoven tale of four lives changed by a mysterious late-night radio broadcast that wakes them up from their mundane existences. Each tale speaks to different social issues without pandering to a political agenda: LGBT+ rights, racism, social network addiction, and the difficult decision between settling down versus following your dreams. Each tale is told in a vivid, polychromatic illustration style that flows from one character to another and back again in a uniquely identifiable fashion.

I downloaded Midnight Radio from Edelweiss on a whim. Not having read anything from this author or publisher before, I wasn’t really sure what to expect, but I figured that a 160-page graphic novel was pretty much risk-free.

The first thing I want to say is that I’ve never read a graphic novel with this kind of art before, but I really enjoyed it! I also really enjoyed how each of the four stories was illustrated in a different color. It really helped me keep track of what was going on in which story and it clearly differentiated scene changes, both definite pluses.

Of the four stories, I think Stephen’s was my favorite. Stephen is Insta-famous, with hundreds of thousands of followers that dote on his every word (or, I guess, photo). Behind the scenes, Stephen is dealing with family and friendship issues and, for reasons we never quite find out, never speaks. I would have loved to read an entire graphic novel just about Stephen. (Not that the other three stories weren’t also good.)

What kept me from rating this five stars was two things. First, the stories do come together at the end, but I wanted more from it. Second, I would have liked to have gone a little more in depth with these characters. I feel like we only scratched the surface of their lives and could have gone so much further.

All in all, I really enjoyed this one! I wouldn’t hesitate to recommend it if you’re looking for a good graphic novel.

Have you read Midnight Radio? Is it on your TBR?
Let’s talk in the comments!