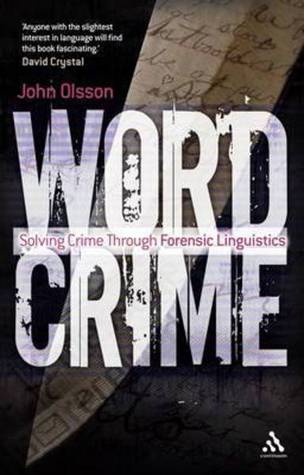 Tell kids not to worry. sorting my life out. be in touch to get some things.

Instead of being a simple SMS message, this text turned out to be crucial and chilling evidence in convicting the deceptive killer of a mother of two. Sent from her phone, after her death, tell tale signs announce themselves to a forensic linguist. Rarely is a crime committed without there being some evidence in the form of language. Wordcrime features a series of chapters where gripping cases are described – involving murder, sexual assault, hate mail, suspicious death, code deciphering, arson and even genocide. Olsson describes the evidence he gave in each one. In approachable and clear prose, he details how forensic linguistics helps the law beat the criminals. This is fascinating reading for anyone interested in true crime, in modern, cutting-edge criminology and also where the study of language meets the law.

In case you didn’t know, I majored in Linguistics in college. I love words, and especially how we use words to get a point across. A book like this, that takes a look at the seemingly simple variations in the way a text, diary entry, or letter is constructed, and what that says about its author, is right up my alley.

In this book, Olsson describes a number of cases that he’s worked on throughout the years. I’m not going to get into all of the cases in this book. The book is far too long for that and I don’t have that kind of time on my hands. What I do want to talk about is a couple cases that I thought were particularly interesting and one that made me very, very angry.

Another case that I found particularly interesting was the one about a man who had written diary entries confessing to a crime that then stated that the entries were fabricated after the details of the case came out. The way that Olsson was able to prove the time period during which the diary entries were written was fascinating!

However, there was one case that made me very angry. As someone with a background in Linguistics that now works in a medical office, I feel that I have enough of a background to adequately comment on the “case of medical disinformation.”

Basically, in this case, a man sued a hospital because they failed to provide the records that he wanted. It sounds terrible, right? As patients, we’re entitled to copies of our medical information and doctors and healthcare systems are not allowed to deny reasonable requests. Any hospital you visit will have a form that you need to complete and sign if you want your records. Most private offices will have one too. This protects the doctor by making it very clear what exactly you want, because HIPAA is not something that doctors want to mess around with. There are hefty fines involved if you violate a patient’s privacy, and, depending on the kind of violation, jail time isn’t out of the question. There’s not really room for interpretation on a records request form. The hospital or doctor will release exactly what you tell them to, because doing anything else puts them at risk for a lawsuit.

Let’s start with some definitions.

Your chart notes are usually narrative paragraphs describing what was done to you at your visit. For example, I work in dermatology and our chart notes will be something like “Patient presents with 0.6 cm lesion on the left upper back, present for many years with recent change in color. Plan: Biopsy today — skin prepped with rubbing alcohol, biopsy performed by shave method, hemostasis via aluminum chloride, ointment and nonstick dressing applied. Wound care instructions given. Follow up pending pathology results.” If you request your chart notes, that’s what you’ll receive. It’s all very boring and not usually what people are expecting when they request chart notes, but we have to provide it if you want it.

Your complete medical record is much more detailed. In addition to chart notes, this includes the actual lab results, information we’ve sent to (or received from) other doctors relating to your care, copies of letters we’ve sent you, your prescription history, summaries of all your conditions, clinical photos… basically anything and everything you could ever think a doctor might keep on file. Even for people who’ve only been seen once, a complete medical record can easily be twenty or more pages.

In this case, the man wanted his complete medical record and believed the hospital should have understood that. However, if you have any understanding of HIPAA or privacy practices, you can see why the hospital would err on the side of caution and not provide more than what was explicitly requested. It’s really very sad, but hospitals and doctors get sued so frequently that they can’t take any chances. If they had given him his entire medical record when all he wanted was chart notes, it’s possible that he could have sued them for releasing his information without his consent.

So when the author of this book claims that the hospital should have been able to infer what the patient wanted when he requested the information, I just have to say… no. There’s a difference between having a degree in Linguistics and understanding the inner workings of the medical field. As my boss likes to say, “from a medical-legal standpoint…” what a patient intends to put on a records request is irrelevant. The only relevant information is what the patient actually signed for.

There’s also a very odd section in this case about how the man requested copies of videos from staff meetings because he thought his case might have been discussed. First of all, I can tell you that no sane doctor keeps videos of their staff meetings. It’s too much of a liability. But even if they did, sharing those videos with a patient would be a huge violation of HIPAA, subject to crazy fines, because I can almost guarantee that his was not the only case discussed. You’re not entitled to view discussions of other peoples’ medical information just because you think the doctor might have also talked about you. It’s absolutely outrageous that this man not only thought he was entitled to this, but also that the author of this book defended this as a reasonable request.

One of my biggest pet peeves is people who have no idea how the medical field works trying to make assertions about the way things should be done. It’s possible that there’s more to this case than the author let on, but based on just the language of the request alone, I can’t say that there was some huge conspiracy here. The hospital did what the hospital had to do, and I’m sorry that this man was confused about how records requests work, but that doesn’t mean that the hospital should break the law for him.

Anyway. That rant is over, and all in all, this book was fine. Olsson had some interesting things to say, but he could have used a good editor and, as illustrated in the records request case, sometimes just didn’t know what he was talking about. I think forensic linguistics is a very interesting field, but I’m sure there are better books about it than this one.

#mmd19: a book about a topic that fascinates you

Have you read Wordcrime? Are you interested in linguistics?
Let’s talk in the comments!