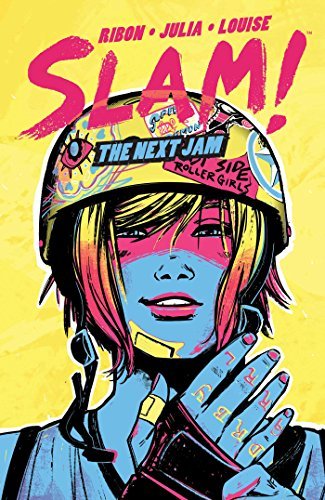 In the fast-paced, hard-hitting, super cheeky, all-female world of banked track roller derby, two young women will need to balance the pull of budding relationships and family obligations with the demands and excitement of roller derby.

After breaking one of the biggest rules in derby (not to mention an actual collarbone) Knockout and Can-Can are back on the track! But they have a lot of rehab to do, both on their battered bodies and their reputations in the league…will their friendship survive the dreaded derby drama?

From bestselling novelist, screenwriter, and Los Angeles Derby Doll Pamela Ribon (Going In Circles, Why Girls Are Weird) and artist Marina Julia (Lumberjanes: Faire and Square) comes the next chapter in SLAM!.

After being so pleasantly surprised by volume one of Slam, I was really excited to jump into what I thought was volume two. It turns out that while Slam: The Next Jam is technically volume two in the series, it’s also considered a new series and the numbering resets at one. As if that isn’t confusing enough, we’ve also got a new artist, so while the characters are sort of identifiable, they also look surprisingly different.

While the pacing in the first volume was fast, I didn’t feel as though the actual work was rushed. I can’t say the same for The Next Jam. Everything in this volume, from the artwork to the storyline to the character development (or lack thereof) feels like it was assembled in about five minutes.

I might have finished volume one of this graphic novel feeling impressed, but I just finished volume two feeling disappointed. I think it’s pretty safe to say that I won’t be continuing on with this one.

4 thoughts on “Book Review: Slam, The Next Jam by Pamela Ribon”