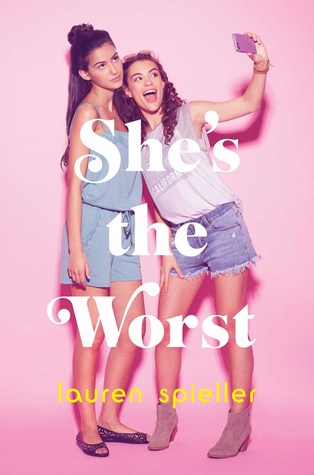 Sisters April and Jenn haven’t been close in years. Jenn’s too busy with school, the family antique shop, and her boyfriend, and April would rather play soccer and hang out with the boy next door.

But when April notices her older sister is sad about staying home for college, she decides to do something about it. The girls set off to revive a pact they made as kids: spend an epic day exploring the greatest hits of their childhood and all that Los Angeles has to offer.

Then April learns that Jenn has been keeping a secret that could rip their family—and their feuding parents—apart. With only one day to set things right, the sisters must decide if their relationship is worth saving, or if the truth will tear them apart for good.

Let’s talk about the things that drew me to this book before we talk about my actual opinions on it:

So, all things considered, I probably should have loved this book. In the end, I was kind of indifferent. Objectively, there was nothing inherently wrong with it, but I think I might be over the target age for this one, or maybe this type of story just isn’t my cup of tea.

What I could not appreciate was the constant drama.

You see, the main conflict in this book could have been resolved in about five seconds if Jenn had just opened her mouth and had a meaningful conversation with literally anyone in her family. Instead, everyone dances around the topic. Jenn avoids an uncomfortable conversation even more deftly than I do. I’ve talked so many times about how much I hate the trope of purposeful miscommunication. In this book, it just came across as childish. I understand that I was reading a book about teenagers, but one of these girls is college-aged. She should be at least trying to act like she’s ready to be an adult.

And, really, don’t even get me started on the parents. I’m sure that parents like this exist, but their existence seems to be primarily in the realm of YA novels. These are parents who are barely capable of surviving without the help of their daughter, who somehow own a business that they don’t know how to run, who blatantly ignore the issues that their children have in favor of their own petty arguments. I can understand how this type of parent creates a backdrop for a story like this, but it’s still very frustrating to me to read a YA novel with stereotypically terrible parents.

Overall, though, I thought that the writing was good. Although the characters frustrated me, they were well-developed and came with their own backstories and their own problems. The thing that kept me from enjoying the book was the constant childish drama, but that might just be my perspective as someone about a decade past the target demographic for this one.

Have you read She’s the Worst? Can you recommend any good books about siblings?
Let’s talk in the comments!