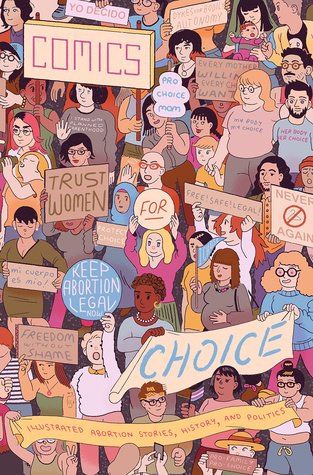 Comics for Choice is anthology of comics about abortion. As this fundamental reproductive right continues to be stigmatized and jeopardized, over sixty artists and writers have created comics that boldly share their own experiences, and educate readers on the history of abortion, current political struggles, activism, and more. Lawyers, activists, medical professionals, historians, and abortion fund volunteers have teamed up with cartoonists and illustrators to share their knowledge in accessible comics form.

I didn’t really know what to expect when I checked this anthology out from the library. All I really knew was that it was a ton of abortion stories and that it would probably make me very, very sad. The thing is, while I can’t see myself ever getting an abortion (except in a very extreme case), I don’t think it’s my place to tell anyone else what they can or cannot do with their life and their body. That means that I’m very firmly on the pro-choice side of the debate. I thought it might be a good idea to expand my horizons a little bit and learn more about abortion.

Turns out that this book was possibly not the right place to go for that. First of all, there are a ton of stories here. A ton. Most of them are very, very short, and most of them feel like they were put together very quickly. There are a lot of misspellings and a lot of grammatical issues. A few of the stories looked more like drafts than finished art. It’s not the end of the world, I guess, but this is a book that’s been put out into the world for people to purchase. I expected more from it.

As for the stories, some of them hit me very hard. I can’t imagine being in the situation that a lot of these women were in and I can’t imagine how difficult the choice to get an abortion must be. I also found the stories from the abortion doulas and clinic escorts very interesting. I hadn’t even known that abortion doulas were a thing before I picked this book up! But some of the stories seemed to be there just to prove a point or push an agenda, which is something I don’t really appreciate, even when it’s a point or an agenda that I can get behind.

When this anthology was good, it was good. But when it wasn’t good, it was just disappointing. Overall, I think two stars is probably the best I can do here.

Have you read Comics for Choice? Do you have any recommendations for feminist nonfiction?
Let’s talk in the comments!