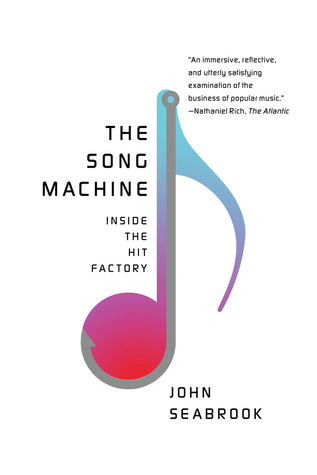 There’s a reason today’s ubiquitous pop hits are so hard to ignore—they’re designed that way. The Song Machine goes behind the scenes to offer an insider’s look at the global hit factories manufacturing the songs that have everyone hooked. Full of vivid, unexpected characters—alongside industry heavy-hitters like Katy Perry, Rihanna, Max Martin, and Ester Dean—this fascinating journey into the strange world of pop music reveals how a new approach to crafting smash hits is transforming marketing, technology, and even listeners’ brains. You’ll never think about music the same way again.

The Song Machine is one of those books that I’d seen at my library countless times but never got around to reading. But ever since I started listening to audiobooks while I work, I’ve had an extra, you know, 40ish hours each week for reading, so I added this one to the lineup. While I was listening to it, I thought it was moderately interesting. I didn’t hate it or anything. But after finishing it and thinking about it, I have some things to say.

The thing is, if you’re looking for information about the actual process of creating a hit song, this isn’t your book. This book is about producers and songwriters and that’s about it. The actual artists are glossed over, except when Seabrook has found an anecdote of someone being difficult that he’d like to share.

And, quite honestly, those “difficult” artists are actually pretty relatable for me. At least, I related to them a lot more than I related to the old men telling them what to do. I mean, if Kelly Clarkson really hated a song, why couldn’t they just have someone else sing it? After all, Seabrook devoted countless pages to talking about how songs that are meant for one artist frequently end up actually being recorded for another.

And don’t even get me started on Kesha. Seabrook has such disdain for Kesha while placing Dr. Luke on some kind of untouchable pedestal. He’s clearly chosen Dr. Luke’s side, painting Kesha as a terrible person who (although he doesn’t come directly out and say it, he strongly alludes to it) has falsely accused Dr. Luke of sexual assault for no real reason.

The chapter on Katy Perry was just gross. I’m not Katy Perry’s biggest fan (I haven’t really listened to her music since the “Teenage Dream” days) but I can recognize that there’s more to her than her body. It was insulting to read and made me feel so bad for her that she can’t escape men ogling her body even in this non-fiction book about how the music industry works.

The last thing I want to mention is the lack of structure in the book. Seabrook will talk about early pop music, Michael Jackson, Elvis Presley, etc, and then he’ll throw in some random anecdote about a modern pop star before jumping back to early pop again. He’ll mention Ester Dean in the middle of talking about someone else even though she gets her own chapter later in the book. It didn’t make a lot of sense and even just listening to it threw me off.

All in all, there is some interesting information here, but I can’t really recommend it.

Have you read The Song Machine? Can you recommend any good books about the music industry?
Let’s talk in the comments!