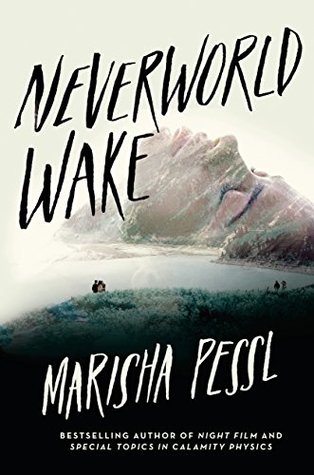 Once upon a time, back at Darrow-Harker School, Beatrice Hartley and her five best friends were the cool kids, the beautiful ones. Then the shocking death of Jim – their creative genius and Beatrice’s boyfriend – changed everything.

One year after graduation, Beatrice is returning to Wincroft – the seaside estate where they spent so many nights sharing secrets, crushes, plans to change the world – hoping she’ll get to the bottom of the dark questions gnawing at her about Jim’s death.

But as the night plays out in a haze of stilted jokes and unfathomable silence, Beatrice senses she’s never going to know what really happened.

Then a mysterious man knocks on the door. Blithely, he announces the impossible: time for them has become stuck, snagged on a splinter that can only be removed if the former friends make the harshest of decisions.

Now Beatrice has one last shot at answers… and at life.

And so begins the Neverworld Wake.

Let me tell you something: I’m really sick of reading books that I’ve already read. And Neverworld Wake? I’ve read it several times. This book is a haphazard conglomeration of a lot of trends, but it especially reminded me of a few very popular YA books:

It would be fine if this book offered something new or interesting, but it doesn’t. We have the days repeating over and over again like in Before I Fall. We have the murder mystery with nobody wanting to share what they know like in One of Us Is Lying. We have the mysterious super rich children like in We Were Liars. Neverworld Wake borrows so many tropes and yet it somehow manages to do absolutely nothing.

The concept of the book is fine — Beatrice is hanging out with her old friends when a man knocks on the door and tells them that they have to decide who will live and who will die. Crazy, right? They brush it off and go on with their lives, but then they find that they’re living the same day over and over again. As the day repeats itself again and again, they try to find their way out of the Neverworld and solve the murder of Beatrice’s high school boyfriend.

The problem is that the book tries to do a lot of things and doesn’t end up doing any of them well. The writing itself is awkward, filled with ridiculous similes like “swirls of blond hair like sugar garnishes on thirty-four-dollar desserts” and metaphors like “we are all anthologies.” Like, I get what the author is trying to say, but writing like that just comes across as pretentious and unnecessary. Half the pages of this book could have probably been cut if they’d just gotten rid of all the unnecessary comparisons.

This book was clearly not for me. I’ve heard good things about Pessl’s other books, so I might give her another try at some point. For now, though, I’m just going to move on to something that’s the polar opposite of this book.

Have you read Neverworld Wake? What’s a book that did an unreliable narrator well?
Let’s talk in the comments!