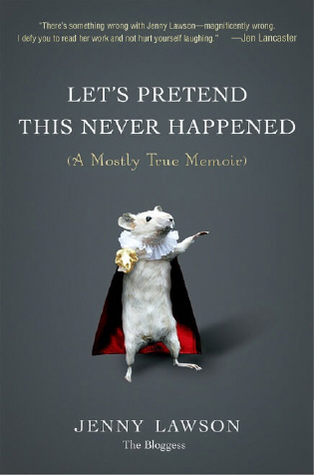 For fans of Tina Fey and David Sedaris—Internet star Jenny Lawson, aka The Bloggess, makes her literary debut.

Jenny Lawson realized that the most mortifying moments of our lives—the ones we’d like to pretend never happened—are in fact the ones that define us. In the #1 New York Times bestseller, Let’s Pretend This Never Happened, Lawson takes readers on a hilarious journey recalling her bizarre upbringing in rural Texas, her devastatingly awkward high school years, and her relationship with her long-suffering husband, Victor. Chapters include: “Stanley the Magical, Talking Squirrel”; “A Series of Angry Post-It Notes to My Husband”; “My Vagina Is Fine. Thanks for Asking”; “And Then I Snuck a Dead Cuban Alligator on an Airplane.” Pictures with captions (no one would believe these things without proof) accompany the text.

It might be odd that I’ve now read not just one, but two, books by a blogger whose website I’ve never even visited. And yet here I am reviewing a second book by Jenny Lawson. In addition to never having read her blog, I also read her memoirs in the wrong order. But that’s not really a problem. Jenny’s life — or at least the way she tells it — is funny, and that’s all that matters.

The thing about Jenny Lawson’s memoirs is that they’re funny. Like, laugh out loud at your desk even when you’re trying to be discreet about the fact that you’re listening to a hilarious audiobook while you work. There are many stories in this book that I enjoyed, but the one that’s stuck in my memory the most is Jenny recounting her days working in HR. I’d like to say that the kinds of conversations she had to have surprised me… but they didn’t.

I enjoyed this book very much. I don’t know if Jenny Lawson is planning to publish any more books, but if she is, I’ll be over here waiting to read them.

Have you read Let’s Pretend This Never Happened? Do you follow Jenny’s blog?
Let’s talk in the comments!