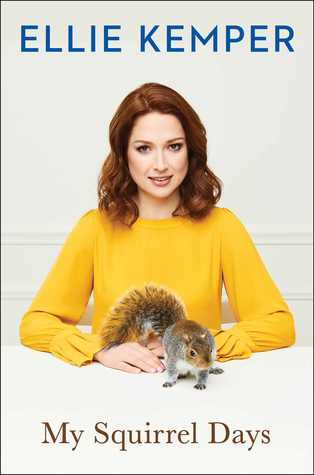 Meet Ellie, the best-intentioned redhead next door. You’ll laugh right alongside her as she shares tales of her childhood in St. Louis, whether directing and also starring in her family holiday pageant, washing her dad’s car with a Brillo pad, failing to become friends with a plump squirrel in her backyard, eating her feelings while watching PG-13 movies, or becoming a “sports monster” who ends up warming the bench of her Division 1 field hockey team in college.

You’ll learn how she found her comedic calling in the world of improv, became a wife, mother and New Yorker, and landed the role of a bridesmaid (while simultaneously being a bridesmaid) in Bridesmaids. You’ll get to know and love the comic, upbeat, perpetually polite actress playing Erin Hannon on The Office, and the exuberant, pink-pants-wearing star of Unbreakable Kimmy Schmidt.

If you’ve ever been curious about what happens behind the scenes of your favorite shows, what it really takes to be a soul cycle “warrior,” how to recover if you accidentally fall on Doris Kearns Goodwin or tell Tina Fey on meeting her for the first time that she has “great hair—really strong and thick,” this is your chance to find out. But it’s also a laugh-out-loud primer on how to keep a positive outlook in a world gone mad and how not to give up on your dreams. Ellie “dives fully into each role—as actor, comedian, writer, and also wife and new mom—with an electric dedication, by which one learns to reframe the picture, and if not exactly become a glass-half-full sort of person, at least become able to appreciate them” (Vogue.com).

I’m a big fan of Unbreakable Kimmy Schmidt (I actually dressed up as Kimmy for Halloween), so I was curious about Ellie Kemper’s memoir as soon as I saw it in my library. And, after reading it, I really like her. She comes across as a really down-to-earth, genuinely nice person who hasn’t been corrupted by having a super popular show on Netflix.

But being a really down-to-earth, genuinely nice person doesn’t necessarily make for an interesting memoir. Now, don’t get me wrong, Ellie is funny. The way that she tells the stories of what’s happened to her over the years is hilarious. She can take a normal day and make it funny, and that’s great.

But does it need a whole book? I’m not so sure.

On the one hand, I was happy to read a memoir that didn’t involve anything dark. Like, literally anything at all. Ellie projects a very upbeat, sunny personality in everything that she does, and her book is no different. The parts of her life that she’s chosen to share in this book are just as cute and quirky as you might expect. But, on the other hand, reading one cute, quirky story after another gets a little tedious. Can anyone’s life really be that perfect?

Overall, My Squirrel Days is well-written, it’s a refreshingly positive memoir, and it’s very, very reminiscent of Kimmy Schmidt. I enjoyed it quite a bit, but everything was so happy and so quirky and so perfect that I don’t think it’ll leave a lasting impression on me.

I’d recommend this if you’re a big Ellie Kemper fan, but if you’re not? You can probably skip this one.

Have you read My Squirrel Days? Do you like Unbreakable Kimmy Schmidt?
Let’s talk in the comments!

5 thoughts on “Book Review: My Squirrel Days by Ellie Kemper”