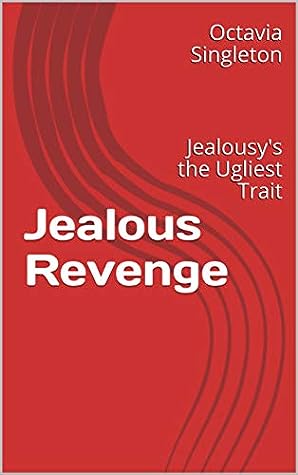 Jealous Revenge by Octavia Singleton
Enjoyment: ★★★★★
Literary Merit: ★☆☆☆☆
Links: Goodreads
Publication Date: October 24, 2019
Source: Gift
Mariah Calhoun is a soft, outspoken college student trying to get through her last semester. But when sister is kidnapped in the name of revenge, Mariah will stop at nothing to get her back. Betrayal, jealousy and deceit are only half the things Mariah must endure as she searches for her sister.

It all happened so fast: one minute my boyfriend was showing me an Instagram post about this great book called Jealous Revenge, and the next, it was sitting in my email inbox. Needless to say, we couldn’t wait. We jumped right in.

This book is an experience. I have never read anything quite like it and I doubt that I ever will again.

This is the story of Mariah Calhoun, who attends Brown University in Los Angeles, which is somehow right next to Atlanta. Yes, this is 100% relevant to a major plot point in this book. (Here’s a map for those of you unfamiliar with US geography.)

For reference, this is where Brown University actually is. (Only the other side of the country, no big deal.)

But anyway. Mariah Calhoun is a dedicated college student who is also raising her younger sister, Jayla, after their parents’ tragic death. Seemingly minutes away from graduation, Mariah’s professor attempts to coerce her into sex by withholding her rightful final exam grade. Mariah is understandably not having any of that, so she reports her professor for sexual harassment. Next thing she knows, her sister is missing.

Two rather incompetent detectives take the case, sort of flailing around as they tell Mariah that she can’t report an actual minor missing until she’s been gone for 48 hours, even with evidence that she’s been kidnapped! They decide to go out to eat before following a lead. They nicely ask to be let into the suspect’s house because they wasted their time going out for a nice meal instead of getting a warrant. It’s a mess, really. It’s a wonder any detectiving gets done on this case.

The writing is… interesting. The author will, without fail, change tense at least ten times per page, sometimes even within the same sentence. The punctuation is completely off, with commas being added in the most random places and everything just being crazy as soon as any quotation marks enter the picture. It also felt like the author read an article one time that said you should minimize how many times you say “he said” or “she said,” so she often goes out of her way to use other words, like “stated” or “mentioned” or “wondered” or “questioned.”

I would like to bless you with some quotes from this book:

Suddenly, a voice that didn’t belong to Monique or Jayla said, “I can help you”. “Who said that”, Monique wondered. “Me. I’m in here. In the vent.”, the voice said.

And on Monday morning, she was going to take over as the CEO of her parents’ business, with her newly earned bachelor’s degree.

Mrs. Wilson opens the door and says, “My husband isn’t here.”, she said to the detectives.

Now, I’ve talked a lot about what I didn’t like. I think I’m ready to get to the part that I did like, and that was the entertainment value. This book was so entertaining. I was on the edge of my seat! I had to know what would happen next! Would Mariah fire a perfectly capable, perfectly qualified employee who’d worked at her parents’ business for at least a decade because she and her new bachelor’s degree were ready to take his job? (The tenacity!) Would someone from Atlanta end up in Los Angeles with no recollection of how they got there? (The intrigue!) Could Mariah’s little sister become captain of the cheerleading squad after never having cheered a day in her life? (The talent!) Would people get shot just to walk around like nothing happened two pages later? (The strength!)

I never knew what was going to happen next. I was formulating all these wild theories with my boyfriend (“what if Jayla got kidnapped because she got the cheerleading captain position when she wasn’t qualified?!”) and let me tell you, they were all wrong. This might not be a piece of classic literature, but it was sure a fun read.

I don’t know what this author is going to write next, but I need to read it.

Have you read Jealous Revenge? Are you as sad as I am that the author took it off Amazon?
Let’s talk in the comments!