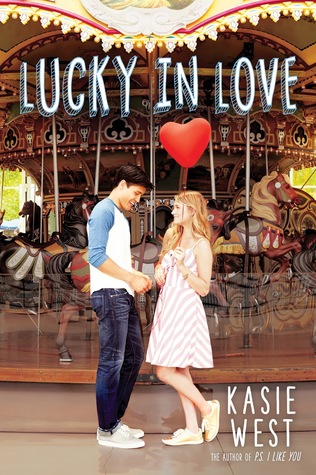 Maddie’s not impulsive. She’s all about hard work and planning ahead. But one night, on a whim, she buys a lottery ticket. And then, to her astonishment —

In a flash, Maddie’s life is unrecognizable. No more stressing about college scholarships. Suddenly, she’s talking about renting a yacht. And being in the spotlight at school is fun… until rumors start flying, and random people ask her for loans. Now, Maddie isn’t sure who she can trust.

Except for Seth Nguyen, her funny, charming coworker at the local zoo. Seth doesn’t seem aware of Maddie’s big news. And, for some reason, she doesn’t want to tell him. But what will happen if he learns her secret?

With tons of humor and heart, Kasie West delivers a million-dollar tale of winning, losing, and falling in love.

I’ve had the same TBR for like three years, so I decided that 2020 is my year. I’m going to read as many books from it as I can. I started with Lucky in Love by Kasie West. Now, I can go either way with her books. I loved The Distance Between Us and cringed all the way through Listen to Your Heart. I wasn’t sure which way this one would go, but I figured that her books are short and easy, so why not.

It turned out to be pretty bad, honestly.

The whole premise of this book is that newly eighteen-year-old Maddie has the worst birthday ever — her brother eats her birthday cereal (yeah, I don’t get it either), her parents take her out to eat and can’t afford the bill, her best friends all stand her up and don’t even come to her birthday party — so she goes out to a gas station and buys a lottery ticket on a whim. There’d be no book without her winning, so she’s suddenly $30 million richer.

She proceeds to do exactly what you might expect an eighteen-year-old high school student to do with $30 million. Waste it. Wildly. Illogically. Stupidly. I’m talking a Corvette, a yacht party, designer clothes, a diamond necklace, half a million to a relative she’s never met… the list goes on. Maddie, who once just wanted to do well in high school so she could get a scholarship to a good college, completely forgets about her classes and fixates on being popular. I was annoyed.

But what was possibly even more annoying than her wildly irresponsible wasting of money was her family. Was I supposed to empathize with any of these people?

The majority of the book is just Maddie spending money, Maddie angsting over whether to tell her love interest that she’s won the lottery, Maddie wondering if everybody who knows she won the lottery is using her for her money, and a romance that kind of feels like an afterthought.

I added a star because I appreciated that the love interest was Vietnamese and that there was a conversation about the very racist “no, where are you really from” question. I also liked the zoo. But overall? Definitely not recommended.

Have you read Lucky in Love? Is it on your TBR?
Let’s talk in the comments!