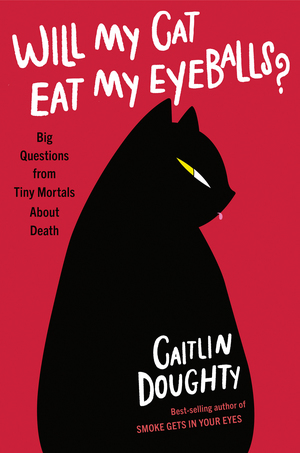 Every day, funeral director Caitlin Doughty receives dozens of questions about death. What would happen to an astronaut’s body if it were pushed out of a space shuttle? Do people poop when they die? Can Grandma have a Viking funeral?

In Will My Cat Eat My Eyeballs?, Doughty blends her mortician’s knowledge of the body and the intriguing history behind common misconceptions about corpses to offer factual, hilarious, and candid answers to thirty-five distinctive questions posed by her youngest fans. In her inimitable voice, Doughty details lore and science of what happens to, and inside, our bodies after we die. Why do corpses groan? What causes bodies to turn colors during decomposition? And why do hair and nails appear longer after death? Readers will learn the best soil for mummifying your body, whether you can preserve your best friend’s skull as a keepsake, and what happens when you die on a plane. Beautifully illustrated by Dianné Ruz, Will My Cat Eat My Eyeballs? shows us that death is science and art, and only by asking questions can we begin to embrace it.

buddy read with my boyfriend!

I was immediately drawn to Will My Cat Eat My Eyeballs? just because of the title. Luckily, I ended up getting it for Christmas, and I absolutely loved it. The book is written in a Q&A format, answering questions asked by children. The questions range from things like the titular “Will my cat eat my eyeballs?” to “Can I be buried with my dog?” and “Can we give grandma a Viking funeral?”

Everything is explained in a really straightforward, informative way without ever getting too heavy. Death is hard and it’s sad and it’s scary to think about our own mortality, but Doughty puts just enough humor in her answers that the book never gets weighed down.

I learned so much about death and dying from this book and now I’m just waiting to read Doughty’s other books. 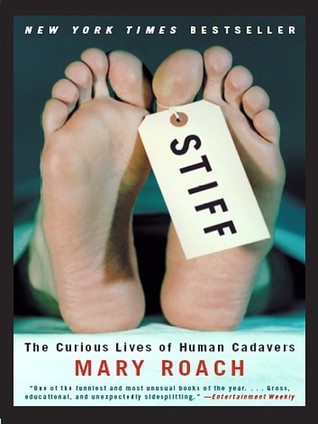 Stiff is an oddly compelling, often hilarious exploration of the strange lives of our bodies postmortem. For two thousand years, cadavers—some willingly, some unwittingly—have been involved in science’s boldest strides and weirdest undertakings. In this fascinating account, Mary Roach visits the good deeds of cadavers over the centuries and tells the engrossing story of our bodies when we are no longer with them.

I’ve seen Mary Roach’s books show up on a number of lists of best nonfiction, and after finishing (and loving) Will My Cat Eat My Eyeballs?, I figured that Stiff would be a good place to start. I really thought that this book would focus on what happens to the body after we die, and it sort of does… but mostly it’s about all the different things a body can do after it dies.

Sure, you can be embalmed and buried in a casket, like many people do in the United States. But you can also donate your body to science — and what does that mean, exactly? What are the different paths your body can take if it’s donated to science? You can become an organ donor and save a number of lives. You can have a natural burial. You can be cremated and spend eternity in an urn or have your ashes scattered. Roach covers all of these possibilities and more.

The book is fascinating, and at times pretty disgusting. I have a pretty strong stomach when it comes to most medical stuff, but the section on the materia medica even made me nauseous, so just be prepared for that. Still, it was worth it to learn about ancient remedies, and now that I’m prepared, I’d actually like to learn more about it.

I’ve decided that all of Mary Roach’s books are now on my TBR and I just have to decide which one to read next.

Have you read either of these books? Have you read any good science-y nonfiction recently?
Let’s talk in the comments!