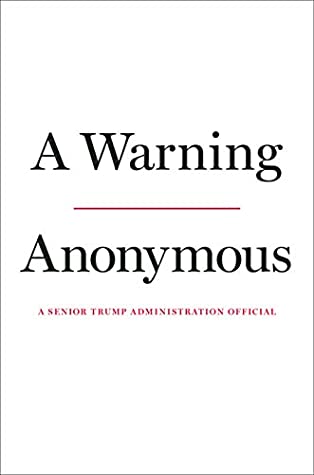 An unprecedented behind-the-scenes portrait of the Trump presidency from the anonymous senior official whose first words of warning about the president rocked the nation’s capital.

I’ve been interested in Trump’s presidency since it began. A celebrity with no political experience running an entire country was bound to be an experience, and it certainly has been. Whatever your political beliefs, whether you agree with what Trump does or not, I think we can all agree that he’s a very different kind of president than we’ve seen before.

After slogging my way through Fire & Fury, more or less enjoying Fear, and being pretty satisfied with Proof of Collusion (my opinion of these Trump books was only going up), I was excited to get my hands (or, more accurately, I guess, my ears) on A Warning. Probably the most interesting thing for me, and for many people, is the anonymity of its author. I’d love to know who wrote it just so I can send them a thank you card, because this is definitely the best book on Trump’s presidency that I’ve had the pleasure of reading.

I think that the best thing about A Warning is that it’s not written by someone who disliked Trump from the beginning. It’s not written to be shocking. It doesn’t call for his removal from office — not because he’s doing well as a president, but because the consequences may be worse than the current situation.

What the book does very well is present information in a clear, organized manner. It’s not a rehashing of CNN and Fox News, either. While there wasn’t a ton of brand new information, the author does put everything in context, describing the daily inner workings of the White House and how things we already knew fit in.

I was a little worried that this book would be poorly written, but I was surprised to find it better-written than any other book I’ve read on Trump’s presidency. It flows nicely, it’s never awkward, and I wouldn’t be surprised if this was written by someone who writes professionally.

I’d recommend this to anyone curious about the inner workings of the White House, especially with the election coming up later this year.

Have you read A Warning? Have you read any good books recently about current events?
Let’s talk in the comments!