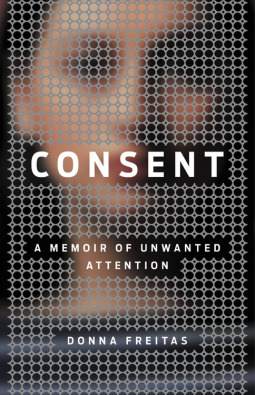 In this “compelling and disturbing” true story (Rebecca Traister), a young woman’s toxic mentor develops a dark, stalking obsession that disrupts her career — and her peace of mind. Donna Freitas has lived two lives. In one life, she is a well-published author and respected scholar who has traveled around the country speaking about Title IX, consent, religion, and sex on college campuses. In the other, she is a victim, a woman who suffered and suffers still because she was stalked by her graduate professor for more than two years.

As a doctoral candidate, Freitas loved asking big questions, challenging established theories and sinking her teeth into sacred texts. She felt at home in the library, and safe in the book-lined offices of scholars whom she admired. But during her first year, one particular scholar became obsessed with Freitas’ academic enthusiasm. He filled her student mailbox with letters and articles. He lurked on the sidewalk outside her apartment. He called daily and left nagging voicemails. He befriended her mother, and made himself comfortable in her family’s home. He wouldn’t go away. While his attraction was not overtly sexual, it was undeniably inappropriate, and most importantly–unwanted.

In Consent: A Memoir of Unwanted Attention, Donna Freitas delivers a forensic examination of the years she spent stalked by her professor, and uses her nightmarish experience to examine the ways in which we stigmatize, debate, and attempt to understand consent today.

This is a hard review for me to write, not because of the subject matter, but because of the way this story is told. Although I think this book tells an important story that needs to be told, I have a number of issues with the way Freitas delivers it, and the messages that she — likely unintentionally — sends in the process. I will get into all of this soon, but I worry that, in writing this book, she has sent the exact opposite of the message she was hoping for.

There may be some spoilers below.

Let’s start with the premise, which is absolutely terrifying. When the author was a college student, she was stalked by a professor. As many students do, she went to his office hours during her first semester. She found the subject matter of his course interesting, and he misinterpreted that as her wanting to form a personal relationship with him. Things escalated to the point that he was inundating her with phone calls on her personal landline and letters to her parents’ house, information he would have only been able to find by accessing her confidential records. He struck up a friendship with her dying mother, only to use it to his advantage. To complicate matters even further, he was a priest at a Catholic university that was dead-set on keeping everything under wraps.

Before I get into my criticisms of this book, I want to make it clear that I think what Freitas went through was absolutely awful. I don’t think that anyone should be subjected to the kind of behavior that she lived with. Her professor is 100% at fault for everything that happened, regardless of any time she willingly spent with him when they first met. With all of that said, I do have a few problems with this book.

I think that the first point I want to make is how disjointed everything is. Freitas tells her story in the most roundabout way. She’s in grad school being stalked by her professor, and then she takes us back to high school when she kissed a bunch of boys, then we’re back in grad school and she repeats herself, and then she’s talking about how she’s the only female on the entire campus who ever dressed nicely, and then she’s back with another weird phone call from the professor. It was almost as if she thought she didn’t have enough to say on the actual topic of the book, so she decided to fill up space with a bunch of random asides.

The second point I want to make is about her lack of action. It infuriated me. I can understand feeling trapped. I can understand feeling powerless. But her professor did so many creepy things, and people noticed. He’d call her parents’ house, and when her family asked how he got the number, she’d lie and say she gave it to him. He’d show up somewhere unexpected and she’d lie and say she invited him. She had so, so many chances to tell even one person that something wasn’t right, and she made excuse after excuse for why she couldn’t. He’s a priest, so he doesn’t mean it like that. I don’t want to get him in trouble since he’s probably just being friendly. My mom is sick and she’s super religious and I don’t want to upset her. Okay, so don’t tell the school. Don’t tell your mom. But tell a friend. Tell your boyfriend. Tell someone.

In the end, more than sending a message that this behavior was wrong or needed to be challenged, I think that Freitas sends a message that the Catholic church is corrupt. I don’t think that she necessarily meant to do this. But after going on about the stalking and harassment for 300 pages or so, the whole thing is never resolved. The Catholic university and Catholic church end up giving her some money and telling her to sign an NDA to make it all go away.

I’m not saying that Freitas’ experiences aren’t valid or that her pain from this situation isn’t real. I can’t even imagine the recovery from something like this. But I feel like this book would have been much better if it had included any kind of resources on what you should do in this kind of situation. Freitas mentions, probably dozens of times, that she lectures on Title IX and abusive behavior. I imagine this means that she shares resources with the audience. That she offers some sort of advice for who you can talk to, where you can go, what you can do to get out of a situation like this. The book was, sadly, lacking any of that. It’s just a sad story of a young woman being stalked and harassed to the point that it effectively ended her career before it even began. The story feels incomplete, and it mostly just left me feeling disappointed.