The day after they moved in, Coraline went exploring….

In Coraline’s family’s new flat are twenty-one windows and fourteen doors. Thirteen of the doors open and close.

The fourteenth is locked, and on the other side is only a brick wall, until the day Coraline unlocks the door to find a passage to another flat in another house just like her own.

At first, things seem marvelous in the other flat. The food is better. The toy box is filled with wind-up angels that flutter around the bedroom, books whose pictures writhe and crawl and shimmer, little dinosaur skulls that chatter their teeth. But there’s another mother, and another father, and they want Coraline to stay with them and be their little girl. They want to change her and never let her go.

Other children are trapped there as well, lost souls behind the mirrors. Coraline is their only hope of rescue. She will have to fight with all her wits and all the tools she can find if she is to save the lost children, her ordinary life, and herself.

Critically acclaimed and award-winning author Neil Gaiman will delight readers with his first novel for all ages.

I was looking through Overdrive for a quick audiobook to listen to at work and came across Coraline. As a big fan of the movie, and having really enjoyed Gaiman’s narration of Norse Mythology, I figured I might as well give it a shot.

The book is very, very much like the movie. That’s a good thing. The movie is just the right amount of dark and creepy, and so is the book. The Other Mother, as I get older, is an even creepier character. I can totally understand Coraline’s feelings and motivation for going over to that other side, and despite already knowing how everything would end, it was still so creepy to hear about the subtle differences in the Other Mother’s house.

Coraline has just made me want to find more Gaiman books to love.

Bestselling author Katherine Arden returns with another creepy, spine-tingling adventure in this follow-up to the critically acclaimed Small Spaces.

Having survived sinister scarecrows and the malevolent smiling man in Small Spaces, newly minted best friends Ollie, Coco, and Brian are ready to spend a relaxing winter break skiing together with their parents at Mount Hemlock Resort. But when a snowstorm sets in, causing the power to flicker out and the cold to creep closer and closer, the three are forced to settle for hot chocolate and board games by the fire.

Ollie, Coco, and Brian are determined to make the best of being snowed in, but odd things keep happening. Coco is convinced she has seen a ghost, and Ollie is having nightmares about frostbitten girls pleading for help. Then Mr. Voland, a mysterious ghost hunter, arrives in the midst of the storm to investigate the hauntings at Hemlock Lodge. Ollie, Coco, and Brian want to trust him, but Ollie’s watch, which once saved them from the smiling man, has a new cautionary message: BEWARE.

With Mr. Voland’s help, Ollie, Coco, and Brian reach out to the dead voices at Mount Hemlock. Maybe the ghosts need their help–or maybe not all ghosts can or should be trusted.

Dead Voices is a terrifying follow-up to Small Spaces with thrills and chills galore and the captive foreboding of a classic ghost story.

Let me tell you something — I love this series. Ollie, Coco, and Brian are back in a ski trip gone awry, this time facing some spooky ghosts instead of creepy scarecrows. The book was just the right amount of creepy for me, enough to keep me on my toes but not so much that I felt genuinely scared. (That said, I have no spooky tolerance and this is middle grade.)

I love how, in this series, Ollie, Coco, and Brian have to work together and trust each other to make it out of these crazy situations. In this book, the characters aren’t sure what’s real and what’s coming from the haunting, and that, to me, made this book a little spookier than its predecessor. They had to use their knowledge of each other (and their wits) to figure out the best thing to do with everything that was thrown at them.

I really never thought I’d enjoy a middle grade series so much, but I can’t wait for the next book. 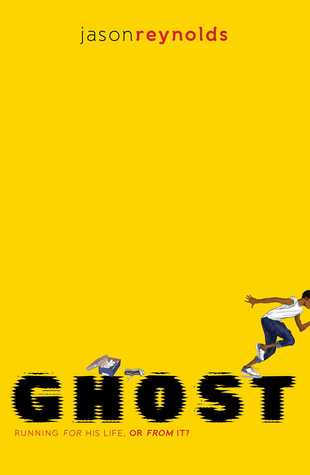 Running. That’s all that Ghost (real name Castle Cranshaw) has ever known. But never for a track team. Nope, his game has always been ball. But when Ghost impulsively challenges an elite sprinter to a race — and wins — the Olympic medalist track coach sees he has something: crazy natural talent. Thing is, Ghost has something else: a lot of anger, and a past that he is trying to outrun. Can Ghost harness his raw talent for speed and meld with the team, or will his past finally catch up to him?

You know, this is my third Jason Reynolds book, and I have yet to connect with his writing. Objectively, I can recognize that a lot of young kids can probably see themselves in Ghost. He’s experienced things no kid should experience, he’s angry about it, and he wants to be a good kid but things just seem to happen around him. He’s a very well-written, well-rounded character.

I just feel like this was a lot to shove into a book that’s not even 200 pages. By the end, nothing felt very… resolved. I realize there are three more books in the series, but they’re focusing on other characters. I had planned to read the rest of the series, but I’m probably not going to enjoy it, so I’m just going to stop here.

As a series opener, there’s nothing wrong with this book. It just wasn’t for me.