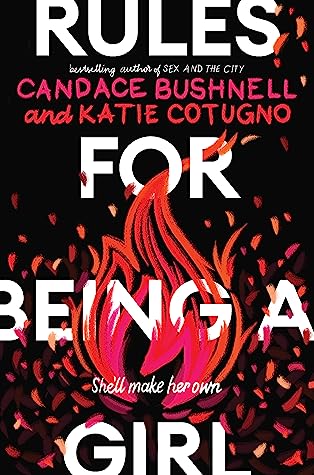 It starts before you can even remember: You learn the rules for being a girl. . . .

Marin has always been good at navigating these unspoken guidelines. A star student and editor of the school paper, she dreams of getting into Brown University. Marin’s future seems bright―and her young, charismatic English teacher, Mr. Beckett, is always quick to admire her writing and talk books with her.

But when “Bex” takes things too far and comes on to Marin, she’s shocked and horrified. Had she somehow led him on? Was it her fault?

When Marin works up the courage to tell the administration what happened, no one believes her. She’s forced to face Bex in class every day. Except now, he has an ax to grind.

Going into Rules for Being a Girl, I really had zero expectations. I’d never read anything by either Candace Bushnell or Katie Cotugno and, well, the synopsis of this one really sounded like it could go either way. It turned out being really well done and I was very pleasantly surprised.

In all honesty, there was a lot going on in this book. Somehow, though, I think it worked.

Marin, a high school student, is an excellent student, she’s the editor of her school newspaper, and she dreams of attending Brown University. Her English teacher builds a friendship with her and then makes a move, which she rejects and reports. In my head, I thought, wow, there are more than a few books and tv shows that could take a lesson from that. As the story develops, Marin deals with friends and authority figures who don’t want to believe that a well-liked teacher would act inappropriately, she meets with her (pretty cool) feminist book club, and she learns and grows so much.

There is a smidgen of romance here, which could have gone completely wrong in a book like this, but it was handled so well that it turned out okay. Marin’s love interest, Gray, turned out to be very sweet and really seemed to understand how a healthy relationship should function.

Overall, I really enjoyed this one. The only reason I gave it four stars rather than five was that nothing that happened was particularly surprising. That doesn’t mean it was bad, though, just not mind-blowing. I would definitely recommend this book to anyone looking for a good feminist YA book.

Have you read Rules for Being a Girl? What’s a book that has surprised you by how good it was?
Let’s talk in the comments!

12 thoughts on “Book Review: Rules for Being a Girl by Candace Bushnell & Katie Cotugno”