It’s time for another WWW Wednesday!

WWW Wednesday is hosted over at Taking on a World of Words and just involves answering the 3 Ws!

Happy Top Ten Tuesday! This week’s theme is books that should be adapted into Netflix shows/movies and… honestly, I probably wouldn’t watch many of these adaptations since I’d be scared they wouldn’t be good, but here are ten books I think would adapt well.

The Extraordinaries by T.J. Klune

Rules for Being a Girl by Candace Bushnell & Katie Cotugno

The Diviners by Libba Bray

Something is Killing the Children by James Tynion IV

Did you do your own Top Ten Tuesday post today? Feel free to leave your link in the comments and I’ll check it out! Have you read any of these books? What are some books you think would make good adaptations? Let’s talk in the comments!

I was tagged by Jamsu to do The Umbrella Academy Book Tag over a year ago(!!!) but I’m finally doing it! Thank you for tagging me!

HELLO: NAME THE BEST FIRST BOOK IN A SERIES

You know, I haven’t read on in this series, but I would say that The Name of the Wind is a great first book.

Any time I hear “big, dysfunctional family,” I immediately think of the Grants from Save the Date.

THE WORLD ENDS IN 8 DAYS: IF YOU ONLY HAD EIGHT DAYS LEFT, WHICH BOOK WOULD YOU CHOOSE TO BE YOUR LAST READ?

I never really do rereads, but I would want to reread a great book if I knew it would be my last. I think The Hating Game would be nice and comforting.

SPACE BOY: NAME A CHARACTER WHO PLAYS THE LEADER, BUT MAY NOT BE CUT OUT FOR IT

I have no idea! I don’t think I read enough action-y books to be able to answer this one.

THROWING KNIVES: WHAT LITERARY WEAPON WOULD YOU WANT IN YOUR ARSENAL?

Is Mia from Nevernight considered a weapon? Because I think she should be.

I HEARD A RUMOUR: NAME A BOOK THAT HAS A MISLEADING PLOT LINE

I’m going to go with Fly on the Wall, because the concept of a girl who turns into a fly and gets to observe all her classmates unnoticed sounds really fun, but mostly all she does is look at everyone’s penis. Or, sorry, “gherkin.” She’s too embarrassed to call them what they are.

KLAUS: NAME A BOOK THAT INVOLVES THE DEAD / GHOSTS / ETC

I don’t think I’ve ever used Cast No Shadow in a tag, so I might as well use it here!

THE BOY: RECOMMEND A BOOK THAT PLAYS WITH TIME (WHETHER IT BE IN DUAL TIMELINES, INVOLVING TIME TRAVEL, ETC.)

I think you could say that Sadie is told in dual timelines, and that book is amazing.

VANYA: NAME A CHARACTER WHO HAS BURIED POTENTIAL

I think that most of the characters in The Kitchen had the potential to be great, but the story just fell short.

LUTHER AND ALLISON: NAME A QUESTIONABLE BOOK COUPLE, AND WHY YOU DO OR DON’T LIKE THEM

Um, Jude and Cardan from The Cruel Prince. I can’t even decide if I like them or not!

I couldn’t come up with a deadly duo, but then I thought of Soraya and her curse from Girl, Serpent, Thorn, and that seems pretty deadly to me.

I’m not sure if it’s the best finale of all time, but I really liked The King of Crows.

What’s your favorite series finale? What book had misleading marketing? Let’s talk in the comments! 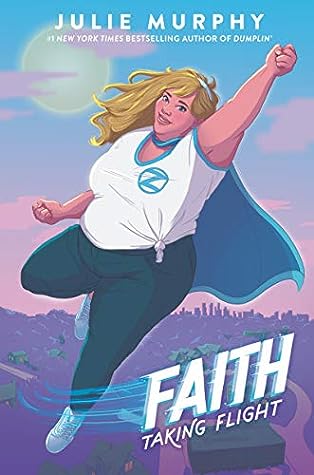 From Julie Murphy, #1 New York Times bestselling author of Dumplin’, comes the first in a two-book origin story of Faith, a groundbreaking, plus-sized superhero from the Valiant Entertainment comics.

Faith Herbert is a pretty regular teen. When she’s not hanging out with her two best friends, Matt and Ches, she’s volunteering at the local animal shelter or obsessing over the long-running teen drama The Grove.

So far, her senior year has been spent trying to sort out her feelings for her maybe-crush Johnny and making plans to stay close to Grandma Lou after graduation. Of course, there’s also that small matter of recently discovering she can fly….

When the fictional world of The Grove crashes into Faith’s reality as the show relocates to her town, she can’t believe it when TV heroine Dakota Ash takes a romantic interest in her.

But her fandom-fueled daydreams aren’t enough to distract Faith from the fact that first animals, then people, have begun to vanish from the town. Only Faith seems able to connect the dots to a new designer drug infiltrating her high school.

But when her investigation puts the people she loves in danger, she will have to confront her hidden past and use her newfound gifts—risking everything to save her friends and beloved town.

I was surprised that after all of the hype that Julie Murphy’s previous books had gotten, I really heard nothing about Faith until it showed up at my library. I’ll read anything this woman writes, so of course I immediately placed a hold on it and waited for my copy to come in.

Like always, Murphy’s writing is really engaging and accessible. I always enjoy reading her books because they’re so comforting to read. I always like her characters and nothing happens in her books that stresses me out too much. Faith was no different.

There was a lot about this book that I really enjoyed, but there were also things that didn’t sit quite right with me. It almost seemed like Faith was deliberately sabotaging her relationships because she was so intent on not telling anyone what was going on in her life. So much drama would have been avoided!

But overall, I did really like this book and I’m curious to learn where this series is going.

Have you read Faith? Is it on your TBR?
Let’s talk in the comments!