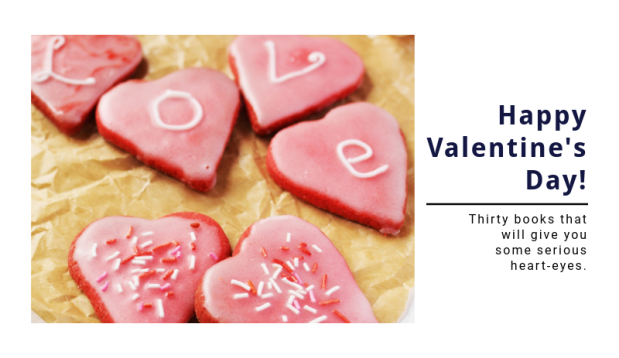 Happy Valentine’s Day! Whether you’re celebrating or not, here are thirty books that will give you serious 😍.

💞 Carry On by Rainbow Rowell
💞 If I Was Your Girl by Meredith Russo
💞 Damaged Like Us by Krista & Becca Ritchie
💞 Aristotle and Dante Discover the Secrets of the Universe by Benjamin Alire Saenz
💞 The Gentleman’s Guide to Vice and Virtue by Mackenzi Lee
💞 Simon vs. the Homo Sapiens Agenda by Becky Albertalli

💞 Fangirl by Rainbow Rowell
💞 Everything, Everything by Nicola Yoon
💞 Operation Prom Date by Cindi Madsen
💞 The Big F by Maggie Ann Martin
💞 The Summer Before Forever by Melissa Chambers
💞 The Unexpected Everything by Morgan Matson

💞 The Deal by Elle Kennedy
💞 Infini by Krista & Becca Ritchie
💞 Remember When by T. Torrest
💞 Sincerely, Carter by Whitney G.

on the steamier side + some erotica:

💞 Anything You Can Do by R.S. Grey
💞 Walk of Shame by Lauren Layne
💞 The Hating Game by Sally Thorne

💞 Me Before You by Jojo Moyes
💞 Arm Candy by Jessica Lemmon
💞 Break of Day by Andie J. Christopher
💞 Roomies by Christina Lauren

What are your favorite romantic reads? Do you have any Valentine’s plans? (I don’t since it’s a Wednesday and I work.)

Sometimes it’s hard to understand why adults read YA.  For me, it’s an escape from the everyday realities of my adult life – work, bills, conflict – but the genre has also evolved from when I was within the target demographic.  For the most part, the genre has grown out of its former boy drama stereotype and branched out into much more varied stories.

If you follow YA at all, you’ve probably seen a lot of hype surrounding Benjamin Alire Saenz’s Aristotle and Dante Discover the Secrets of the Universe.  It’s a poetically written, character-driven story about two polar opposites who become friends and grow into better people.

Similarly, Morgan Matson’s books always get a fair bit of hype, and with good reason.  She crafts realistic characters who face real-world problems in an age-appropriate way – something that used to be almost unheard of in YA.  In Since You’ve Been Gone, Emily’s best friend has disappeared without a trace, leaving her only a list of thirteen tasks to complete before summer ends.

An author that (almost) always does the genre justice is Libba Bray.  I’ve been a huge fan of hers for over a decade now, and I continue to read everything that she publishes.

In Beauty Queens, Bray delivers a story focused on a group of teenage beauty pageant contestants that have been stranded on a deserted island after a plane crash.  The diverse cast uses their combined talents to survive while simultaneously dismantling the patriarchy.

Changing styles completely, Bray’s Lair of Dreams follows a psychic flapper and her oddball group of friends through 1920′s New York City as they solve mysteries and fight stereotypes.  This spooky series is ongoing, with the third book publishing later this year.

The Hate U Give tells the story of Starr, a young girl who witnesses police shooting (and killing) her unarmed friend, and the fallout from friends, family, and the media.  In addition to police brutality, it discusses the demonization of victims and the realities of being a young POC in the United States.  Somehow, Thomas does this without ever once sounding preachy.

By now, Red Rising is a few years old, and you’ve probably either read it or decided that you’re over the hype.  On the off chance that you haven’t, let me tell you about this wonderful story.  This intricately built world features a number of castes and a protagonist who attempts to dismantle the system from within. It’s rare for dystopian YA to feel new, but Pierce Brown has created an incredible world.

David Levithan is a pretty ubiquitous YA author, and his books rarely disappoint.  The best in recent memory is his collaboration with Nina LaCour, You Know Me Well. Stepping aside from the typical romance plot, Levithan and LaCour build a beautiful friendship between two strangers struggling with their own problems.

With a host of taboo topics, The Death of Bees easily steps away from what you might expect from YA.  This is a dark, twisted, creepy story about the powerful relationship between two sisters, and everything that the older sister would do to keep the younger one safe.  Tackling topics such as drug abuse, dead parents, and prostitution, it’s not for the squeamish, but it’s so worth it if you’re willing to take a chance.

Rainbow Rowell’s Carry On is unlike anything I’ve ever read.  It’s based on the world of Simon Snow, a Harry Potter-esque character from Rowell’s Fangirl, and Simon’s rival-slash-love interest, Baz.  Simon and Baz put their differences aside to fight some evil monsters, and somehow, at the same time, fall in love.

My Lady Jane is based on the true story of Lady Jane Grey.  The authors take a lot of creative liberties with Jane’s life, involving shapeshifters and a bunch of Monty Python-style references, to create a hilarious retelling of the events that led to England’s Nine Day Queen.

Aristotle and Dante Discover the Secrets of the Universe | Benjamin Alire Sáenz
July 7, 2014Leave a comment

Sometimes, all you have to do is tell people the truth. They won’t believe you. After that, they’ll leave you alone.

Ari and Dante are polar opposites. While Dante openly loves everyone and everything, Ari keeps his emotions locked away, not even acknowledging them to himself. Dante is happy. Ari is mad at everyone, including his parents, his brother in prison, and himself. When Dante notices Ari struggling at the pool and offers to teach him to swim, Ari doesn’t think they’ll have much in common. He certainly doesn’t expect that they’ll become best friends.

Aristotle and Dante Discover the Secrets of the Universe is the best kind of book – one I would have loved as a teenager, and one I still love now. So often, I read young adult novels and think, “Hey, I probably would have liked this ten years ago, but now it doesn’t really do it for me.” Not so with this one. I think teenagers, twenty-somethings like myself, and adults can all enjoy this story.

I can’t do this book justice in a review, so I’ll keep it short. If you’re considering reading this book, just do it. It’s a beautiful story. You won’t regret it.