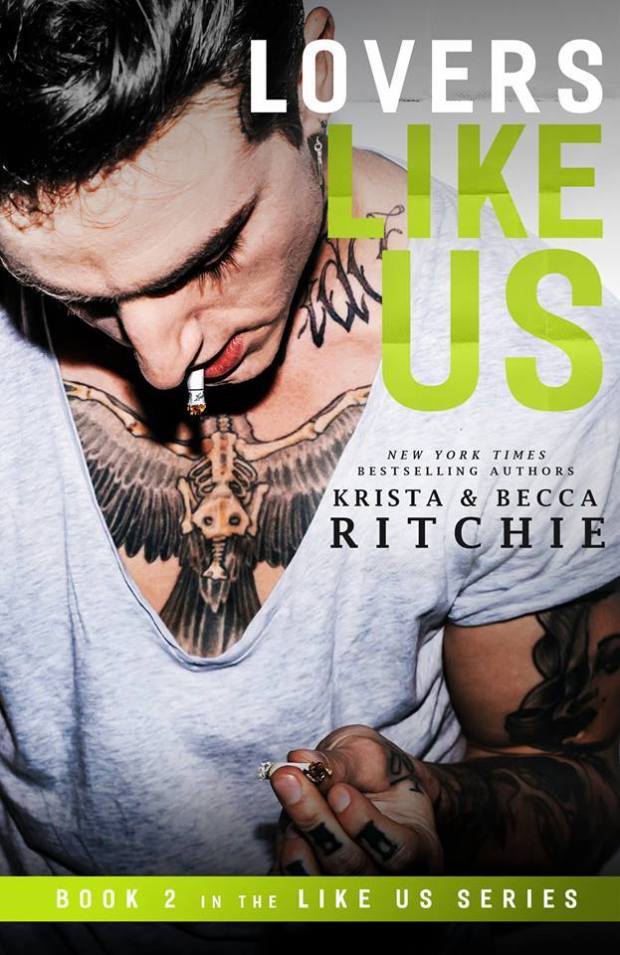 If you’ve been following me for any length of time, you probably know that I love Krista & Becca Ritchie.  I’m a little late on this, but yesterday they did a cover reveal for Lovers Like Us, the second book in their Like Us series, which follows the children of the main characters in their Addicted series.

I loved Damaged Like Us and I cannot wait for Halloween so that I can finally get my hands on this beautiful book. See the brand new blurb below:

Twenty-seven-year-old Farrow Keene lives by his actions, and his actions say he’s the best at whatever he does. As a 24/7 bodyguard and the new boyfriend to Maximoff Hale, protecting the headstrong, alpha billionaire has never been more complicated. And one rule can’t be bent:

Keep your relationship secret from the public.

Farrow is confident he’s the best man for the job. But a twist in Maximoff’s fast-paced life sticks them with the rest of Security Force Omega and their clients.

On the road.
In a sleeper tour bus.
For four rocky months.

But Farrow couldn’t have accounted for a high-risk threat (identity: unknown) that targets Maximoff before the ignition even turns. And it hits Farrow — someone has it out for the guy he loves.

Every day, Maximoff & Farrow’s feelings grow stronger, and together, they’ll either sink or swim.

I’ll actually be on an airplane on October 31 and I’m trying to decide whether it would be a good idea to read this book in a small, enclosed space with a bunch of strangers.  Regardless, I’ve preordered it and I hope that you’ll consider doing the same ➜ http://amzn.to/2yfmbM3

I never thought to ask what a celebrity who could have anyone in the fucking world fantasizes about. And I wonder how long it’s been me.

Maximoff Hale, the eldest son of the infamous Lily and Loren Hale, heir to a billion-dollar empire, and head of his own philanthropic organization, has been followed by paparazzi since birth.  Everybody wants a piece of him, and he’s never known a life where he’s not flanked by bodyguards 24/7.

Moffy’s used to it.  He’s had the same bodyguard for years, and he barely even registers his presence. Only now, his bodyguard is retiring.  Moffy will be stuck with a new bodyguard.  Someone he’ll have to get used to. Someone who will follow him around, handing out non-disclosure agreements before hookups and making sure that nobody slips anything into his drinks. Moffy was prepared for just about anything.  He wasn’t prepared for Farrow Keene.

Farrow is a Yale graduate, MMA fighter, and until now, served as Lily Hale’s bodyguard.  As the son of the Hales’ concierge doctor, Farrow was around through most of Moffy’s childhood, and Moffy has harbored a huge, secret crush on Farrow since he was a teenager. Now, Moffy and Farrow will be together all day, every day. It’s only a matter of time before things heat up.

Be still, my heart.  Krista and Becca Ritchie have done it again.  I’m not sure how these women can possibly make me fall in love with every single one of their characters, but they do. Every time.  Moffy and Farrow are both bossy, stubborn alpha males who constantly clash and try to get the upper hand.  In the wrong hands, these characters might not work together.  But here, with these authors, it was perfect.

Also perfect were the side characters, both the other bodyguards and the other children from the Addicted series.  Moffy lives with his cousin and best friend Jane Cobalt, and can I just say that I hope Jane gets everything she wants in life and that nobody hurts her ever? The other Hale, Cobalt, and Meadows children all make cameos in this book, and I loved seeing them all grown up.

Damaged Like Us is a little different from what I usually read.  But I’ve said it before, and I’ll say it again: there is nothing that these authors could write that I wouldn’t read.  There’s nothing that they could write that I won’t love. While I’ve certainly read some cute, fluffy YA with M/M pairings (Carry On, Simon vs. the Homo Sapiens Agenda), this was my first explicit, adult M/M book.  Who better to introduce me to the genre than Krista and Becca?

I am in love with these characters and so excited that Krista and Becca have started a new series.  I’m not sure how I’ll possibly survive until Lovers Like Us comes out – October 2017 can’t get here fast enough.  This book is highly recommended for just about anybody, but particularly anybody who enjoyed the Addicted and Calloway Sisters series.

#mmdreading: a book in a genre you usually avoid

Don’t miss Damaged Like Us (Like Us #1) by Krista & Becca Ritchie! I couldn’t be more excited to jump into the life of Maximoff Hale, son of beloved Addicted characters Lily and Loren Hale.  It feels like I’ve been anticipating this release forever, and the day is finally here!

Don’t date your bodyguard. It was the one rule he had to break. Maximoff Hale is a force of nature. A ship unwilling to be steered. Headstrong, resilient, and wholly responsible — the twenty-two-year-old alpha billionaire can handle his unconventional life. By noon, lunch can turn into a mob of screaming fans. By two, his face is all over the internet. Born into one of the most famous families in the country, his celebrity status began at birth. He is certified American royalty. When he’s assigned a new 24/7 bodyguard, he comes face-to-face with the worst case scenario: being attached to the tattooed, MMA-trained, Yale graduate who’s known for “going rogue” in the security team — and who fills 1/3 of Maximoff’s sexual fantasies. Twenty-seven-year-old Farrow Keene has one job: protect Maximoff Hale. Flirting, dating, and hot sex falls far, far out of the boundary of his bodyguard duties and into “termination” territory. But when feelings surface, protecting the sexy-as-sin, stubborn celebrity becomes increasingly complicated. Together, boundaries blur, and being exposed could mean catastrophic consequences for both.

Krista & Becca Ritchie are New York Times and USA Today bestselling authors and identical twins—one a science nerd, the other a comic book geek—but with their shared passion for writing, they combined their mental powers as kids and have never stopped telling stories. Now in their early twenties, they write about other twenty-somethings navigating through life, college, and romance. They love superheroes, flawed characters, and soul mate love. They are the New Adult authors of the Addicted series and Calloway Sisters spin-off series, and you can find them on almost every social media, frolicking around like wannabe unicorns.

Enter to win a $50 Amazon gift card and signed copy of Damaged Like Us!

My name is Luka Kotova. I’m an irresponsible fuck-up. Thanks for your time. Now let me be.

Luka Kotova is a high-risk acrobat in Aerial Ethereal’s Viva.  Baylee Wright is a talented juggler in Aerial Ethereal’s Infini.  The two were inseparable friends when they were children, and a romance blossomed as they grew older. Unfortunately, they were torn apart by circumstances out of their control, and while they haven’t spoken in years, they’ve never forgotten about each other either.  Now that Luka has been transferred from Viva to Infini, they’re reunited, and they can hardly keep their feelings under control.

If you’re a fan of Krista & Becca Ritchie, you’ll no doubt recognize Aerial Ethereal as the setting for Amour Amour.  Although Infini can technically be read as a standalone, I would highly recommend reading Amour Amour first so that you can understand the full impact of everything that happens.  Luka is the brother of Nikolai, Amour Amour’s protagonist, and many side characters from that book pop up throughout Infini, and some play fairly major roles.

So, I basically read this entire book in one day as I was home sick from work.  It was really the ideal distraction from how disgusting I felt because Krista & Becca always create these engaging worlds that you just can’t step away from.  You just have to keep reading. It seemed like I had just started it and then I was at the 80% mark.  This book is 465 pages, and I flew through it in a few hours.

The verdict?  Luka Kotova has won my heart.  I don’t know what it is with these authors.  They create such beautifully flawed characters with such good hearts that you can’t help but love.  I mean, Luka’s got his issues, but I never for a second doubted that he was a good person.

And don’t get me wrong – Baylee is a great character, too.

But LUKA. Ugh.  I just wanted to reach through the pages and give him a hug.  The guy has been through so much in his life and he is still so loving and caring and nurturing toward his siblings.  I know he’s a fictional character, but I hope he’s happy.

The whole Kotova family, actually, is just great.  Even Kotovas that you think you won’t necessarily like turn out to be wonderful people.  I love how much they care about each other.  How much they rely on each other and help each other through whatever happens.  There’s just no question.  If something happens, you just know that you’ll have this big group of Kotovas there, rooting for you.

Speaking of side Kotovas, can I put in a formal request for Katya to get her own book and to finally find some happiness?  And also for Camila and Dimitri to get their own book, because clearly they are meant to be.  Also, if I can continue to make unsolicited suggestions, can we just see more of Timo and John being cute? Please and thank you!

If you’re a fan of Krista & Becca’s other series (Addicted/Calloway Sisters), you’ll be thrilled to know that those characters are alive and well in this book. There are shout outs to Calloway Couture, Superheroes and Scones, Fizz and Ziff, and even the villainous Scott Van Wright!

And speaking of Scott Van Wright, I saw an early review that compared him to Geoffrey, Infini’s choreographer.  I mean, sure, Geoffrey is a jerk, but I thought there could be no possible way that he’d be worse than that manipulative backstabbing pedophile, but then there was –no spoilers– that scene with all of the Kotova guys protecting Luka from him, and my heart just shattered into a million pieces because WHO GAVE HIM THE RIGHT.  I am still crying over that scene.  I honestly forgot how good Krista & Becca are at breaking my heart.

I guess I’m just going to end this by saying that I loved this book.  I loved Luka’s (parentheticals), like even though we were in his head, there were things he wasn’t sure he wanted to share. I’ve never seen that done in a book before, and I was really impressed with how it made me feel like I knew him better.

When I initially finished this book, I thought, oh that was good, I’ll give it a 4.5. But you know what? This book deserves more than a 4.5.  It deserves all the stars, so I have to give it a full five.

#mmdreading: a book with a reputation for being un-put-down-able