In a novel-in-verse that brims with grief and love, National Book Award-winning and New York Times bestselling author Elizabeth Acevedo writes about the devastation of loss, the difficulty of forgiveness, and the bittersweet bonds that shape our lives.

Camino Rios lives for the summers when her father visits her in the Dominican Republic. But this time, on the day when his plane is supposed to land, Camino arrives at the airport to see crowds of crying people…

In New York City, Yahaira Rios is called to the principal’s office, where her mother is waiting to tell her that her father, her hero, has died in a plane crash.

Separated by distance—and Papi’s secrets—the two girls are forced to face a new reality in which their father is dead and their lives are forever altered.

And then, when it seems like they’ve lost everything of their father, they learn of each other.

Elizabeth Acevedo is really good at writing books that pull a lot of emotions out of the reader. The Poet X hit me hard, and With the Fire On High was so good too. With Clap When You Land, she tackles a plane crash and its aftermath on two different girls.

While I did enjoy this book, I didn’t like it nearly as much as The Poet X. It’s written in verse and told in two different perspectives, and I had a lot of trouble distinguishing Yahaira’s chapters from Camino’s. Because of that, I don’t think I connected with either character as much as I’ve connected with her characters in the past.

But this book was still good. It tells an interesting, intense story about family dynamics, grief, and betrayal. It’s definitely worth the read and I look forward to reading whatever Acevedo publishes next.

A boy desperate to hold on, a girl ready to let go.

Fitz Holton waits in fear for the day his single mother’s early-onset Alzheimer’s starts stealing her memory. He’s vowed to stay close to home to care for her in the years to come–never mind the ridiculous college tour she’s forcing him on to visit schools where he knows he’ll never go. Juniper Ramirez is counting down the days until she can leave home, a home crowded with five younger siblings and zero privacy. Against the wishes of her tight-knit family, Juniper plans her own college tour of the East Coast with one goal: get out.

When Fitz and Juniper cross paths on their first college tour in Boston, they’re at odds from the moment they meet– while Juniper’s dying to start a new life apart for her family, Fitz faces the sacrifices he must make for his. Their relationship sparks a deep connection–in each other’s eyes, they glimpse alternate possibilities regarding the first big decision of their adult lives.

Time of Our Lives is a story of home and away, of the wonder and weight of memory, of outgrowing fears and growing into the future.

These authors have been kind of a mixed bag for me. It’s clear that they can write a good story, but is that kind of story necessarily the kind of thing I want to read? Not always. While I loved If I’m Being Honest, I was really disappointed by how strongly cheating factored into Always Never Yours. I’d say that Time of Our Lives falls somewhere in the middle of that.

I’m really conflicted in my opinions about this book because, like I said, the writing was really good. But the plot? I’m just not sure. It felt really rushed to me, and just so unrealistic. I did like Fitz’s obsession with words, and as someone who majored in Linguistics in college, it made me really happy that he was considering it for himself!

All in all, this definitely wasn’t my favorite book by these authors, but I’ll still be reading whatever they publish next. 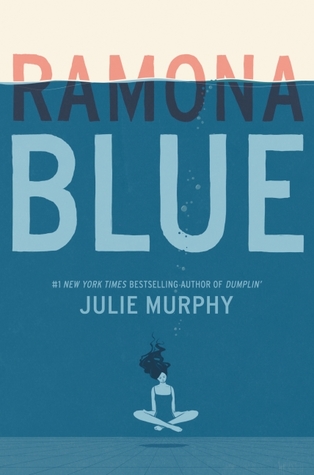 Ramona was only five years old when Hurricane Katrina changed her life forever.

Since then, it’s been Ramona and her family against the world. Standing over six feet tall with unmistakable blue hair, Ramona is sure of three things: she likes girls, she’s fiercely devoted to her family, and she knows she’s destined for something bigger than the trailer she calls home in Eulogy, Mississippi. But juggling multiple jobs, her flaky mom, and her well-meaning but ineffectual dad forces her to be the adult of the family. Now, with her sister, Hattie, pregnant, responsibility weighs more heavily than ever.

The return of her childhood friend Freddie brings a welcome distraction. Ramona’s friendship with the former competitive swimmer picks up exactly where it left off, and soon he’s talked her into joining him for laps at the pool. But as Ramona falls in love with swimming, her feelings for Freddie begin to shift too, which is the last thing she expected. With her growing affection for Freddie making her question her sexual identity, Ramona begins to wonder if perhaps she likes girls and guys or if this new attraction is just a fluke. Either way, Ramona will discover that, for her, life and love are more fluid than they seem.

I did not know that Ramona Blue caused such a stir until I started reading the reviews. My goodness, there’s some controversy. As a straight woman, I don’t think I’m really qualified to comment on the bisexual representation here, but I will say that I thought Julie Murphy wrote a very good book and I don’t think there was any malicious intent.

I really liked all of the characters, although Ramona could be a little… strong-willed at times. There’s not really a ton of plot here aside from the romance. Instead, we’re kind of just following Ramona and her family and friends around through their daily lives. What we do have is well-written, though, and it’s a little bit heartbreaking.

Ramona Blue hasn’t overtaken Dumplin‘ as my favorite book by Julie Murphy, but it was still really good!