I recently posted a few other tags, but here are two more! Honestly, I love doing tags. Tag me in everything and I’ll be so happy!

I was tagged by The Broken Bookshelf to do the Book Blogger Test Tag! Thanks for tagging me!

The rules:
You must answer all of these questions truthfully and once you’ve completed this tag, tag 5 other book bloggers to answer the questions next.

What are your top three book pet hates?

Describe your perfect reading spot
I like to read in bed with my cat, but I’m not sure that’s the perfect spot. More perfect would be a big comfy chair with a fluffy blanket and nobody bothering me.

When was the last time you cried at a book?
I teared up a little bit at one point during The Kiss Quotient, but if we’re talking full-blown tears streaming down my face, probably All the Bright Places by Jennifer Niven.

How many books are on your bedside table?
As of right now, eight. I keep my immediate TBR on my nightstand.

What is your favorite snack whilst you’re reading?
I don’t eat while I read because #1 I would mindlessly eat so much food and #2 I’m too worried about ruining either the book or my Kindle.

Name three books you’d recommend to everyone
Well, this is a pretty difficult question because everyone has different tastes. I mean, I’m not going to recommend the same book to my mom that I’d recommend to my best friend or my boss. Although I guess if you’re reading this, we probably have at least semi-similar taste in books, so I’d go with:

Show us a picture of your favorite shelf on your bookcase
All of my shelves are kind of a disaster right now since I’m in the middle of reorganizing them… so I guess I’ll go with my nightstand, which is at least reasonably okay. I wish I could hire someone from bookstagram to make my shelves pretty! 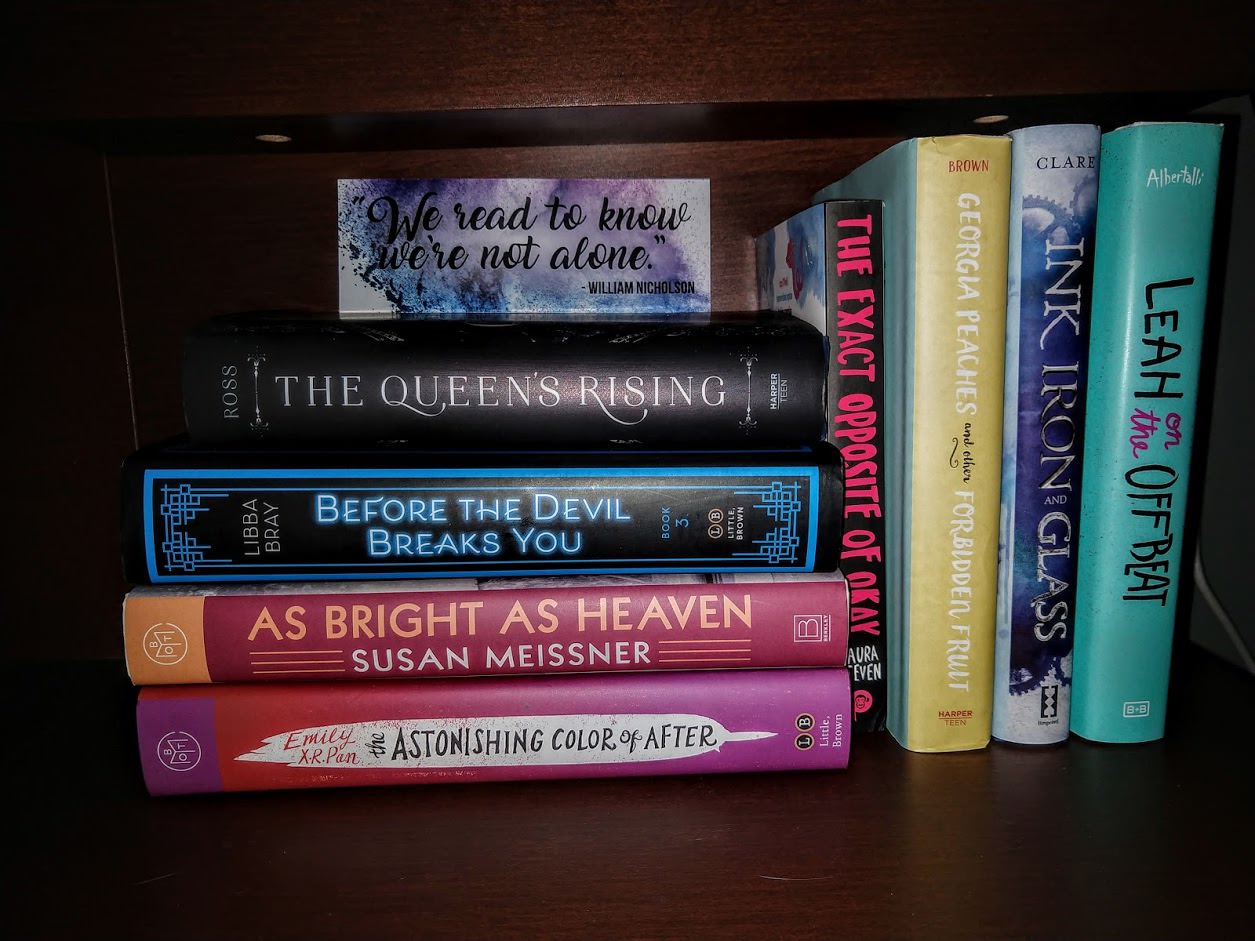 Write how much books mean to you in 3 words
There aren’t a lot of three-word sentences that would work. I guess I’ll go with “I’m always reading.”

What’s your biggest reading secret?
I don’t know if I really have any reading secrets! I think that I’ve talked before about how I never read the books that were assigned in my many lit classes in college (except the ones I had to talk about), but it was definitely a secret back then.

I was tagged by Anya @ Fuelled by Books, Lotte @ The Reading Hobbit, and Daniel @ Page to Page to do the Mystery Blogger Award. I previously did this one a couple weeks ago, but I can always do it again!

Three Things About Myself

Do you prefer hardbacks or paperbacks? Why?
I prefer paperbacks because they’re lighter and easier to store. But most of my newer books are hardback since that’s just the way it worked out.

If you could only read books by one author (but they’d release like a massive amount of books all the time) for the rest of your life, which one would you pick?
Good question! I’m really into Jenn Bennett right now, so I suppose I’d go with her!

Favorite ice cream flavor?
My favorite ice cream I’ve ever had is The Munchies at Ample Hills Creamery in Brooklyn. For just a regular I’m going to the grocery store and what am I going to buy kind of ice cream, I’d go with chocolate chip cookie dough.

What’s a cool anecdote you tell at parties?
I have no shortage of weird and funny anecdotes from work to tell at parties. But more than likely, you won’t find me entertaining a crowd by telling a story. I’ll probably be off in the corner playing with my friend’s son or somebody’s dog.

Do you have any pets? If not, would you like some and what kind? 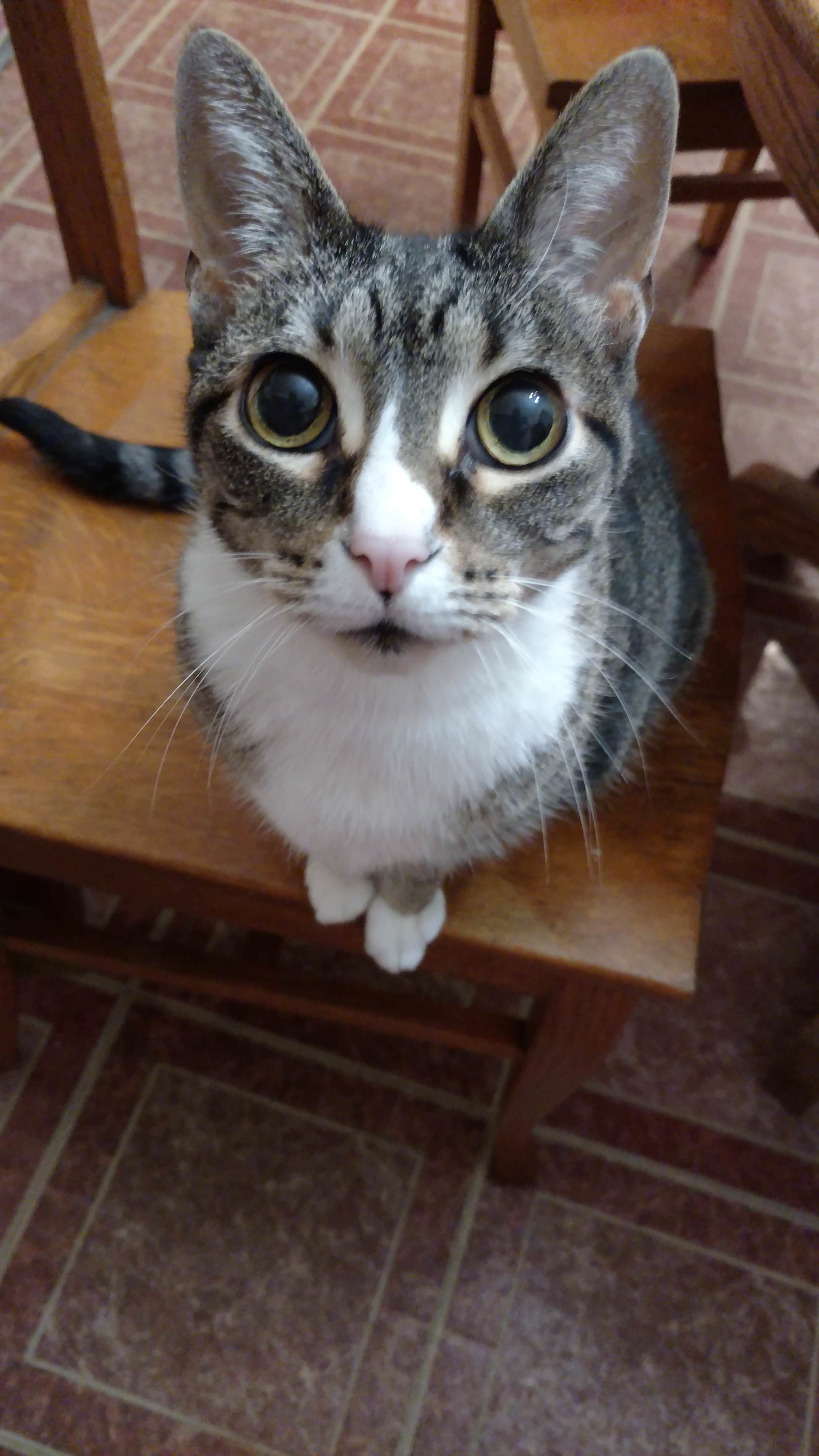 Yes, thank you for asking. I love talking about my pets. I have a cat, Aubrey, who is elderly and adorable and I honestly think that she thinks she’s a person. She follows me around and talks to me (well, in her old age, the noises she makes are more like grunts) and sleeps with me and hugs me. I got her from the Humane Society in 2004 and it’s the best decision I’ve ever made.

We also have a saltwater aquarium with a few fish, some hermit crabs, and a ton of snails and corals.

I’d like to get a dog at some point in the future, but my current landlord doesn’t allow them.

If you could only read one book for the rest of your life, which one would you pick?
This is such a hard question because I so rarely re-read anything! I guess I’d say Simon vs. the Homo Sapiens Agenda because that’s one of the few books that I’ve re-read and actually enjoyed more the second time around.

You have been made King/Queen of a small country, what would your country be called and what would your first law be?
Can I call it Bibliophagia and make the first law that all workplaces have to allow reading in your downtime? It’s crazy that I can pull out my phone and scroll through Facebook and Twitter when I’m all caught up on my work but I can’t pull out a book and start reading.

You are given the option of knowing the exact date and time of your death or staying blissfully unaware, which would you pick?
I don’t want to know! I’d just worry about it for the rest of my life, like Oh, great, now I only have 27 years, six months, three days, twelve hours, two minutes, and forty-one seconds left to live. Better make it count.

If you were told you could be an expert in any one thing instantly, what would you pick?
I’d like to be fluent in another language. I studied Spanish and Portuguese in college and I can fumble my way through a conversation, but I’m nowhere near where I want to be.

What one stereotype about your country do you want the whole world to know is wrong?
That’s a hard one. Maybe that we’re all really into guns? I mean, I’m originally from northern Wisconsin and I can tell you that yes, a lot of people there are obsessed with their guns. (Not my family, though, none of us are big gun people.) But I went to college in Madison and it’s definitely not pro-gun there. I don’t think I know anybody in New Jersey who owns a gun.

Who is one person you would freak out if you met in real life?
One person I almost met in real life until I totally freaked out and ran the other way was Jack Antonoff at Shadow of the City in 2015. I’m such a huge fan of fun., Bleachers, and Steel Train and he was like three feet away from me taking selfies with everybody who asked and I proceeded to panic and run away.

What book would you recommend for “non readers”? Why?
I actually had a non-reader friend ask me for a recommendation not that long ago. I told her to read In the Blood by Lisa Unger because it’s weird and twisty enough to keep someone interested even if they might not necessarily love to read.

If you had to write the ultimate fan fiction, which five characters would you choose to include in it?
Would you believe that I’ve never written any fanfiction? I don’t even know where I’d start! I really love The Good Place, though, so I think I’ll go with five of the core characters: Eleanor, Chidi, Tahani, Jason, and Michael. I don’t know where Janet is in this mess but I guess they’ll have to make do without her.

My Questions for You:

No pressure if you’ve already done either of these tags or if you’d rather not participate!