Happy Top Ten Tuesday! Today’s theme is books I loved with fewer than 2,000 ratings on Goodreads. I’m really excited about this theme because it’s been a while since I last shared my favorite hidden gems!

The King of FU by Benjamin Davis

23 ratings on Goodreads • my review

Before Daylight by Andie J. Christopher

40 ratings on Goodreads • my review

64 ratings on Goodreads • my review

146 ratings on Goodreads • my review

You Asked For Perfect by Laura Silverman

150 ratings on Goodreads • my review

What Makes Girls Sick and Tired by Lucile de Pesloüan

308 ratings on Goodreads • my review

411 ratings on Goodreads • my review

You’d Be Mine by Erin Hahn

474 ratings on Goodreads • my review will be posted in a couple weeks!

604 ratings on Goodreads • my review

The Brightsiders by Jen Wilde

682 ratings on Goodreads • my review

Did you do your own Top Ten Tuesday post today? Feel free to leave your link in the comments and I’ll check it out! What are some of your favorite hidden gems? Let’s talk in the comments!

Happy Top Ten Tuesday! Today’s theme is ten books that awaken the travel bug in me, which was a little difficult since I’m one of the (seemingly) very few people in the world that does not like to travel.

I get so stressed out!
I worry about everything!
I’ll probably embarrass myself trying to communicate in a foreign language!
I feel like I have to do something every minute or otherwise what was the point in getting myself there!

But, that said, I did come up with ten books that kind of, sort of made me feel like I might want to pack a bag and go somewhere.

🤩 Starry Eyes by Jenn Bennett: First of all, Jenn Bennett could make me want to do anything. But this story of two former friends-turned-enemies-turned-lovers made me, a person who hates the very idea of camping, want to go spend a week in the wilderness.
💋 The Brightsiders by Jen Wilde: I don’t really like the ocean. I like sitting on a beach next to the ocean (not in New Jersey, though) but not actually being in the ocean. That said, the yacht trip in The Brightsiders sounded like so much fun and is something I would’ve loved to do with my friends back in the day. Or even now.
⛩️ Seven Days of You by Cecilia Vinesse: I loved the setting in this book! It takes place in Japan and it’s so vivid — the karaoke clubs, the trains, the hustle and bustle of daily life. It would be so fun to visit.

🌳 The Green Unknown by Patrick Rogers: I mentioned in my review that this book made me want to pack up and explore an unknown country. A couple months later, I stand by that statement.
🌀 Break of Day by Andie J. Christopher: Yeah, I know, they get stranded in Cuba during a tropical storm. But the whole thing is so romantic and it just really made me want to go to Cuba. Maybe not during hurricane season.
✈️ The Upside of Falling Down by Rebekah Crane: Okay, here’s another one that’s a little weird. The whole premise of the book is that the main character is stranded in Ireland after her plane crashes. But the people she meets are so nice! The scenery is so vivid! I would love to visit Ireland under better circumstances.
💔 Frenched by Melanie Harlow: I might be in a relationship that’s going on ten years… but I might still also be a little tempted to take a trip to France to see if I can meet anybody like Lucas.

🤸 Infini by Krista & Becca Ritchie: Basically, I just want to meet the love of my life, Luka Kotova. Going to Vegas is secondary.
💍 Roomies by Christina Lauren: I basically live down the street from NYC. (Okay, it’s a short train ride, but still.) Is it really considered a “travel bug” when a book makes me want to hop on the train and go to a bunch of musicals and meet a cute subway musician? I’m going to say yes.
⚜️ The Beau & The Belle by R.S. Grey: I think that of all of R.S. Grey’s books, this one has the most vivid scenery. It’s set in New Orleans and I really just want to go eat a bunch of food down there.

Did you participate in this week’s theme? What books make you want to pack a bag and explore the world? Let me know in the comments! 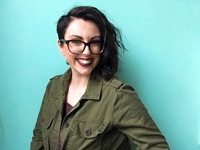 Happy Top Ten Tuesday! Today’s theme is top ten new releases I’m looking forward to in 2018, which I had a lot of fun coming up with.  I’ve noticed pink and teal seem to be the trend in these book covers, and I’m totally cool with that.

Summer Skin 🔹 The Brightsiders 🔹 The Way You Make Me Feel

On the Come Up by Angie Thomas

Which 2018 releases are you looking forward to?