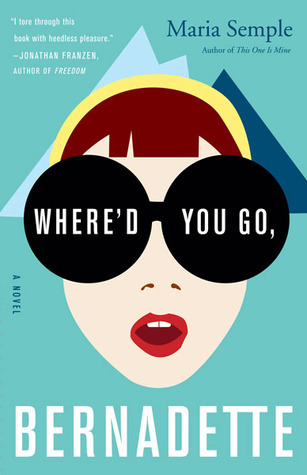 A compulsively readable and touching novel about misplaced genius and a mother and daughter’s role in an absurd world.

Bernadette Fox is notorious. To her Microsoft-guru husband, she’s a fearlessly opinionated partner; to fellow private-school mothers in Seattle, she’s a disgrace; to design mavens, she’s a revolutionary architect, and to 15-year-old Bee, she is a best friend and, simply, Mom.

Then Bernadette disappears. It began when Bee aced her report card and claimed her promised reward: a family trip to Antarctica. But Bernadette’s intensifying allergy to Seattle – and people in general – has made her so agoraphobic that a virtual assistant in India now runs her most basic errands. A trip to the end of the earth is problematic.

To find her mother, Bee compiles email messages, official documents, secret correspondence – creating a compulsively readable and touching novel about misplaced genius and a mother and daughter’s role in an absurd world.

I read this book because supposedly it is considered satire, and my reading challenge stipulates that I must read a satirical book this year. Having finished this book, I am not 100% convinced that it’s satire. I think it may just be a book about awful adults and their daughter who has miraculously turned out to be a productive member of society.

Bernadette Fox was once a revolutionary architect, so talented that she won a MacArthur grant for her work. Then, after disaster struck one of her projects, she never so much as drew another floor plan. These days, Bernadette is an antisocial recluse who outsources even her grocery shopping to Manjula, her Indian virtual assistant. Bernadette’s husband, Elgie, is a famous employee of Microsoft. His TED Talk is the #4 viewed of all time, and his work could change the world.

These two intelligent, Ivy League-educated parents manage to screw up their daughter’s life in just about every way possible, and yet somehow, Bee is a clever, well-adjusted young woman. All the ways in which these parents screw up Bee’s life is basically the premise of this book.

I couldn’t figure out how I was supposed to react to this. It was written in such a way that I think I was supposed to find it funny, or maybe I was just supposed to see Bernadette and Elgie as these unpredictable, eccentric people? But I didn’t. I thought they were irresponsible, their relationship was unhealthy, and the way that they acted with blatant disregard for their daughter was just too much.

The premise of this book, of course, is that Bernadette disappears. (That much is clear from the title.) Her frustration is understandable: her little quirks have been blown out of proportion by a neighbor that she doesn’t get along with. Rather than stay to defend herself, though, she falls off the face of the earth.

My first problem with this is that it doesn’t fit at all with the Bernadette we’d met earlier in the book. Bernadette is quirky, yes. She doesn’t like to leave the house except to take her daughter to and from school. She hires Manjula to make phone calls for her. Her home is in such a state of disrepair that a gardener comes to weed-whack… indoors. She has blackberry bushes growing out of control in her basement. Yet, though all of that, it’s clear that she loves her daughter. Bernadette and Bee are best friends. They stand up for each other. They have a special bond. So the fact that Bernadette would just disappear without giving Bee a heads up doesn’t fit with her character at all.

My second problem with this is that Elgie doesn’t really care. Again, this doesn’t seem to fit with his character. Sure, he’s focused on his work. His job takes up a good portion of his life, especially since he’s the head of a huge project and has a large team to supervise. But we never get the impression that he doesn’t care about Bernadette. Actually, at the beginning of the book, it would seem that, despite Elgie’s annoyance at some of Bernadette’s antics (he’s not a huge fan of Manjula), the two are still very much in love. That’s why a lot of what happens toward the end of this book is utter nonsense.

I think I’m actually in the minority, having actually enjoyed the writing style. It’s almost like a scrapbook, almost, with emails, faxes, letters, and articles interspersed with Bee’s observations. It reminded me of some books that I really liked when I was younger.

Overall, I guess this really depends on the reader. (But don’t all books?) For me, it was just too much and too unbelievable. For someone else, it might be engaging and dramatic and hilarious.