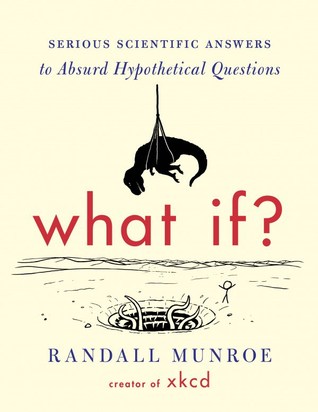 Randall Munroe left NASA in 2005 to start up his hugely popular site XKCD ‘a web comic of romance, sarcasm, math and language’ which offers a witty take on the world of science and geeks. It now has 600,000 to a million page hits daily. Every now and then, Munroe would get emails asking him to arbitrate a science debate. ‘My friend and I were arguing about what would happen if a bullet got struck by lightning, and we agreed that you should resolve it . . . ‘ He liked these questions so much that he started up What If.

If your cells suddenly lost the power to divide, how long would you survive?

How dangerous is it, really, to be in a swimming pool in a thunderstorm?

If we hooked turbines to people exercising in gyms, how much power could we produce?

What if everyone only had one soulmate?

When (if ever) did the sun go down on the British empire?

How fast can you hit a speed bump while driving and live?

What would happen if the moon went away?

In pursuit of answers, Munroe runs computer simulations, pores over stacks of declassified military research memos, solves differential equations, and consults with nuclear reactor operators. His responses are masterpieces of clarity and hilarity, studded with memorable cartoons and infographics. They often predict the complete annihilation of humankind, or at least a really big explosion. Far more than a book for geeks, WHAT IF: Serious Scientific Answers to Absurd Hypothetical Questions explains the laws of science in operation in a way that every intelligent reader will enjoy and feel much the smarter for having read.

For this review, I’m throwing it way back to 2007 when I was obsessed with xkcd. So was one of my friends, and we did things like printing the comics out to hang in our lockers, doodling the comics in class, and referencing the site in casual conversation. Senior year of high school, he signed my yearbook with a recreation of one of the comics. I may have had a panel of the ball pit comic as my Livejournal icon for a while. When I say obsessed, I mean obsessed.

So when I saw that Randall Munroe had written a book, I did what anybody who obsessed over someone a decade ago and hadn’t thought of them since would do — I completely ignored it. I mean, I’d seen it on Goodreads. I’d seen it in stores. I’d thought about reading it, but then I thought, “Sara, what if it’s terrible and it completely ruins your teenage years for you?” Then one day I just decided to go for it.

It wasn’t great, either, but it wasn’t terrible.

I’ll probably read Munroe’s other book at some point, but I feel like they’d be better spaced out than read back-to-back.