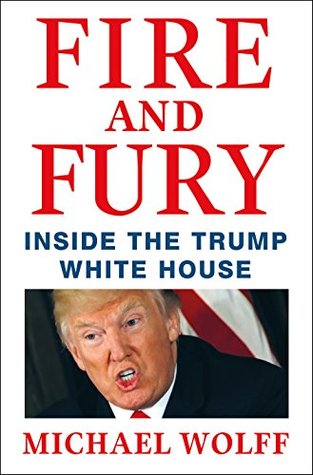 With extraordinary access to the Trump White House, Michael Wolff tells the inside story of the most controversial presidency of our time

The first nine months of Donald Trump’s term were stormy, outrageous—and absolutely mesmerizing. Now, thanks to his deep access to the West Wing, bestselling author Michael Wolff tells the riveting story of how Trump launched a tenure as volatile and fiery as the man himself.

In this explosive book, Wolff provides a wealth of new details about the chaos in the Oval Office. Among the revelations:

Never before has a presidency so divided the American people. Brilliantly reported and astoundingly fresh, Michael Wolff’s Fire and Fury shows us how and why Donald Trump has become the king of discord and disunion.

I think most of us (a good 60% of the United States, at least) can agree that Donald Trump’s presidency has, so far, been a disaster. I didn’t vote for him.  I would have been happier if almost any other human being were elected president. But, as he was elected, and then inaugurated, I tried to hold on to at least a sliver of hope that he would listen to advisors and not run the country into the ground. As his presidency continues, it’s become clear that he has no intentions of doing the right thing, no plan to better the country, and no idea what even makes America great, let alone how to make it great “again.”

Still, with all my burning dislike of the man, I never intended to read this book. There are many things I would rather do with my time than read about a man I so strongly despise, but after Trump tried to block publication of this book – after he made such a scene over its content – I obsessively refreshed my library’s homepage until it showed up.  I’ve said it to my coworkers, to my friends, and to my family: I firmly believe that if Trump had just ignored this book, it would not have been nearly as big of a deal.  As it stands now, Michael Wolff has received a seven-figure paycheck for the film and television rights. The book sits atop bestseller lists. It’s not going anywhere anytime soon.

The book is controversial. That much is true. But, the thing is, it’s really not that great. It’s clear from the beginning that it was rushed to publication. The writing is choppy. The editing is almost non-existent. The pages are full of run-on sentences and typos. Sometimes Wolff uses the wrong word or just forgets a word altogether. Even setting aside these mistakes, which could easily be corrected in the next printing, the book is just… odd.

So, here’s what I don’t understand. It’s not that I doubt that people have made these various claims about Donald Trump. He’s a very stable genius and like, really smart and he has the best words and whatnot, but come on, we all know he’s an idiot. My biggest question about this book is how Wolff got these entire pages of quoted conversations. Surely some of it has to be embellished. Unless everybody in the White House walks around with a voice recorder in their pocket, I don’t know how we could possibly have entire transcribed conversations in this book.

Aside from that, I found the book rather confusing. There are so many people to keep track of, and then on top of that, you have to remember how everybody is connected. I read the news daily, but that didn’t always help me here. I think I needed a big organizational map or something to help me keep track of who was loyal to who at what point in time and when they were hired or fired and who they replaced.

And even moving on from that, I think the worst thing about this book is that it’s just boring. I definitely struggled to read it, rewarding myself for finishing chapters by reading entire other books. (I read four other books while attempting to read this one.) By the time I was about halfway through, I turned on text-to-speech and listened while making dinner. By 80%, I just skimmed. There were, at times, some great quotes. Occasionally there was a section about some meeting or policy point I hadn’t previously heard about. But, for the most part, the book summarized all the news articles of the last year.

The book is certainly hyped, and it’s not going to hurt you to read it, but don’t go in expecting a masterpiece.

7 thoughts on “Book review: Fire and Fury by Michael Wolff”