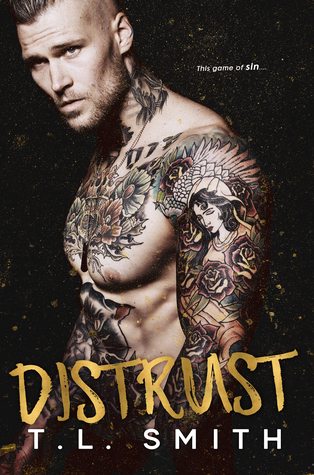 Distrust by T.L. Smith
Series: Smirnov Bratva #1
Rating: ★☆☆☆☆
Links: Amazon • Goodreads
Publication Date: September 21, 2016
Source: I made the poor decision to one-click this one all by myself.

She was a ghost, in heels.

She was there, then she wasn’t.

She would play with my emotions like a well-played guitar.

Then she would disappear. Making me want to strangle her.

Her lips were shaped like a heart, deceiving you at every word.

Her body was created straight from my fantasies, one I craved to bend to my will.

Her heart, well, who the hell knew. She kept that shit locked tight.

And I couldn’t find the key.

There might be some mild spoilers in my review, but I’ve tried to keep them to a minimum.

Sometimes the books I choose for my #killingthetbr challenge are really good. The Golden Compass by Philip Pullman, Saint Anything by Sarah Dessen, and The Bell Jar by Sylvia Plath are all books that sat on my shelves forever before I finally got up the motivation to read them.

Sometimes, though, they’re really bad. My first really bad #killingthetbr book of the year was Axl. Dear lord, it was terrible. When I was on page 7 of Distrust, I made a note that it felt like Axl, Part 2. I also made a note that I was seven pages in and ready to DNF. Unfortunately, when I read a book for this challenge, I force myself to slog through and finish. That is, after all, the whole point of the challenge. You know, to actually read the books.

I guess the first thing that I should mention is that my rating here is partially my fault. I never like dark romances, so I’m not even sure why I one-clicked this one. I must have seen a really glowing review or something because I typically avoid this genre like the plague. It’s also possible that I wasn’t paying attention when I clicked that button. Regardless, I’m not surprised that I hated this book because I always hate dark romance.

I should probably also make a content warning. Now, I read all sorts of books. One of my favorite series has a main character who inserts the word “fuck” in nearly every sentence. I read a semi-decent amount of erotica. I’m not really squeamish about many things, but a whole lot of stuff happened in this book that was so unnecessary.

In Distrust’s mere 183 pages, there are 128 uses of fuck, 25 uses of shit, and more than 50 uses of various other words that you probably wouldn’t say in front of your grandmother, unless your grandmother is really cool. There are also numerous scenes of gratuitous violence (it is dark romance, after all) and mentions of rape.

I read a lot of ARCs, many of them uncorrected. Many of them have disclaimers at the beginning that any and all editing errors will be corrected before the final print. I don’t let grammatical errors or misspellings or problems with punctuation lower my rating of an ARC. In this case, though, Distrust has been published. It’s out in the world for everyone to see, and it’s a mess. I know that I just keyboard smash my feelings out a lot of the time, but I promise I actually have a degree in Linguistics and am aware of how to properly construct a sentence. But anyway, moving on. (But not really, because I have two examples I want to share.)

My eyes burn through the glass, wondering what answers it holds for me because I need them. I want the answers. No one seems to have what I need! They have solutions, solutions I don’t want nor need.

Even setting aside the grammatical issues in that paragraph, aren’t solutions and answers kind of the same thing in this context?

I mean, the tense changes four times in this paragraph, but also… this is during a dinner scene. Like, he’s literally talking about having sex with his lady friend in front of his dad and brothers.

Something petty first: I’m not clear on why the hero’s name is Kazier, of all things. I kept thinking of Hozier while I was reading and I’m sure that’s not what the author intended. Honestly, though, take me to church because something’s gotta cleanse me from all of this nonsense.

Kazier is supposed to be the hero of this book, but, I mean, I wouldn’t want to come within fifty miles of him. I certainly wouldn’t want anything to do with him romantically. Not only is he terrifyingly brutal (he enjoys watching an enemy be tortured to death in one of the opening scenes), I’m afraid that he might actually be a sociopath.  The man feels no remorse for any of his crimes, going so far as to remark on the beauty of a human body catching fire.

He’s incredibly misogynistic, frequently commenting on how Freya, the fiance he doesn’t even want, could be pretty if she put more effort into her appearance. He continually tries to determine whether Freya is sexy because, of course, her sexiness is the be-all and end-all of her existence. Don’t worry though, he plans to treasure Freya even though he doesn’t want to marry her… but he’s hooking up with Elina on the side. But it’s not his fault! He can’t help it because Elina is really sexy and knows how to act like a woman!

But does he treat Elina well? Of course not! This is Kazier we’re talking about! In a rare chapter from Elina’s POV, we get the following statement:

I would never condone abuse, I was brought up surrounded by it. I know it well, I’ve lived it. Even my father used to beat me when I didn’t listen. Kazier didn’t abuse me, that was just his normal.

Elina, honey, he just sliced you open with a knife. I don’t care if he’s cute or if you think you love him or if it’s different from the abuse you experienced as a child. Kazier is an abusive asshole and you need to leave him.

Moving on to Freya, I’ve seen a disappointing number of reviews that mention what a horrible character she was. I actually thought that Freya was the only character in the book who had some sense in her! She doesn’t put up with Kazier’s bad behavior and she’s totally willing to put him in his place. That said, she can actually be an idiot sometimes, because even she’s drawn in by Kazier’s magical pheromones as she asks him to kiss her amidst death, destruction, and revenge.

Apparently there’s also a character named Death and I’m still not entirely sure if that’s his real name or if it’s a nickname.

Did you know that they’re Russian?

This book is about the Russian mafia. I’m not sure if you realized that when the author mentioned the Russian mafia eighteen thousand times in 183 pages, but it is. In case you’d somehow forgotten, the characters are conveniently given the last name of “Smirnov” and are very frequently found drinking vodka straight from the bottle. Just in case you forgot that they were Russian… because you probably did.

Did you know that I love Brooklyn? It’s one of my favorite places! I feel perfectly safe taking my three-year-old nephew out by myself. So I’m not quite sure what Brooklyn this book takes place in, where the Russian mafia owns all of the stores and people are constantly gunned down in their front yards. The real Brooklyn is a hipster paradise where people stop to let you pet their dogs and you can get some ooey gooey butter cake ice cream and rose petal doughnuts. There are other areas of New York City that this book could have been more realistically set in. I might have even forgiven this if it had been set in a very specific neighborhood of Brooklyn. But the idea that Brooklyn is this dangerous place filled with warring mafias is just… wrong.

First of all, why would you rip an IV out of your arm? This is such a cliched, horrible thing that happens all the time in books and movies and tv shows. Like, you know there’s a huge needle shoved into your vein, right? That’s what an IV is. But Kazier just wakes up and rips that IV straight out of his arm and everything’s fine. Nary a drop of blood to be seen. Amazing.

Kazier is also (evidently) such an amazingly talented and well-endowed lover that at one point, Elina’s waist literally starts shaking because she wants him so much. I repeat, her waist starts shaking. I would think, personally, that if your waist is shaking, you’re probably experiencing some gastrointestinal distress and should seek either a bathroom or a physician, but hey, that’s just me.

I ended up skimming the second half of the book and I don’t think that I missed much. I suppose that you might enjoy Distrust if you really like dark romances, but even then, I can’t recommend it. Usually I try to find something positive to comment on, but I just can’t do it with this one. It’s earned its place on my nope shelf.